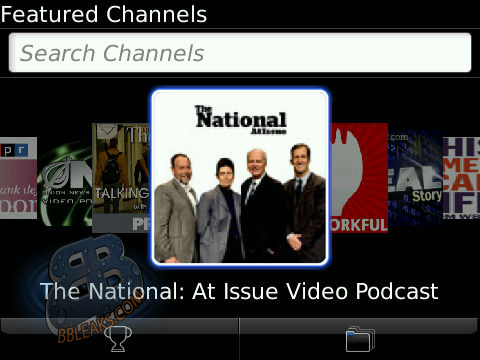 One of the details that came out of the BlackBerry OS 6 video was the hint of a podcast app, and here it is in early beta form.  You can’t add your own podcasts, and have to pick from a limited selection, but there seems to support for video podcasts, and you can browse through a series of categories. The UI is reminiscent of App World, mostly by way of a carrousel of featured shows. The 480 x 360 display resolution suggests that older devices like the BlackBerry Bold 9700, Tour 9630, and Curve 8900 will be able to support the app, and it won’t be limited to OS 6.0.

I’m a little sad for app developers who have tried to fill the podcast gap in BlackBerry, namely Versatile Monkey’s Podtrapper, which has been an excellent sub-in for some time.

UPDATE: There’s another review up over here, on what looks like the Storm. Sounds like there’s a closed beta floating around…

GetJar, which touts itself as the world's largest independent app store, scored another partner for its white label mobile app...