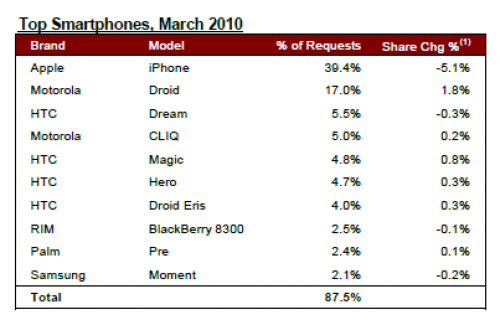 According to the AdMob report that we showed you a couple of days ago, one of the more interesting things mentioned in the report was that 54% of Android traffic was driven by devices that has a full QWERTY keyboard on it.

The top three Android devices in the US are the Motorola Droid, the HTC G1, and the Motorola CLIQ. All have keyboards. All running different versions of Android. The Motorola Droid started out with Android 2.0, and has recently received the upgrade to 2.1. The G1 is running Android 1.6, after a year of being on 1.5, and the Motorola CLIQ is still rocking Android 1.5. So it seems that users don’t really mind what software version they are running, but it’s evident that a physical QWERTY keyboard is of high importance. It’s (comically) sad that the Samsung Moment is dead last on the top ten Android phone list. Looks as though not even a slide out keyboard could get the thing to sell.

Interestingly enough, there aren’t too many QWERTY keyboard-packing Android devices in the works. There are a few, such as the Aloha, the mystery HTC slider, the MyTouch Slide, the Motorola flip phone device, and the Motorola Shadow. All but the last device has been spotted at least once, but the last is the real one we want, isn’t it?

With screen sizes on newer phones getting bigger and bigger, it’s easier for users to adapt to on-screen keyboards. But what makes one think they need a full keyboard? Even with my short time with the Motorola Droid, I used the on-screen keyboard so much more than the hardware keyboard. The Motorola Droid’s keyboard has gotten  a lot of shit for being too small, not enough feedback from when you press a key, and so on. In less than two weeks of having the device, I had mastered the keyboard, yet I still went back to the on screen keyboard. Everyone’s different though. I, for one, don’t need a keyboard, although having the option is nice.

So are you one of the many who are sporting a QWERTY packing Android device? Well you can pat yourself on the back, as you’re fueling the most traffic for the entire OS.

A nice and brief one, this one - my buddy Stephen over at Fonehome.co.uk has got his hands on a...