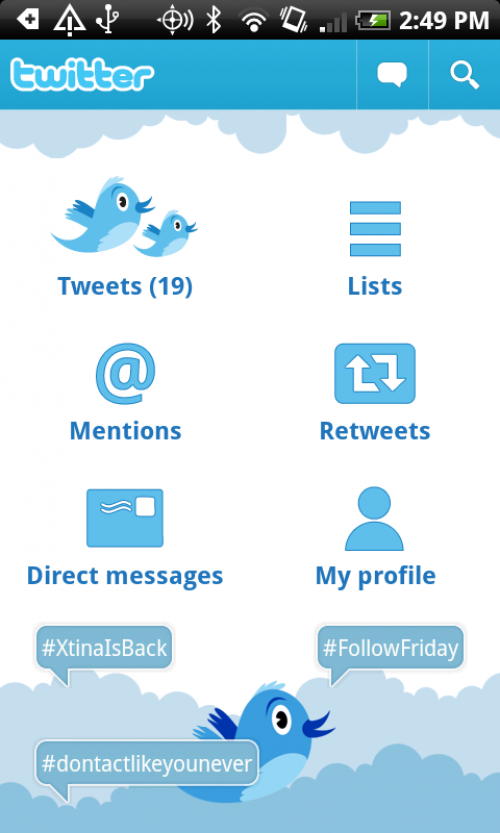 Well, it took them long enough. Twitter has finally let loose the official Android Twitter application. In my five whole minutes of using it, it looks like we may have a Twitter app champion on our hands. Not too surpising, seeing as how Twitter did make it.

Once signed in, you’re presented with a screen similar to that of the Facebook app (for Android 2.0 and up) asking whether you want to sync all of your Twitter contacts into your phone, or just the existing contacts. This was surprising to see, and I’m very happy they added this. Very smart. You are then greeted with the Twitter home screen. Also like the Facebook application, you’re presented with a Tweets, Mentions, Direct Messages, Lists, Retweets, and My Profile options. All is very nice and clean.

On the top of the screen, there is a bar with dedicated options to search, and to tweet. When going into any other part of the application, a refresh option appears on the bar as well. At the bottom of the Twitter home screen is an animated flying tweet bird, and tapping it will take you to a list of all trending topics. Surrounding the bird are all of the trending topics that pop up in little texts bubbles, and are constantly updating themselves. Very nice touch indeed. The last notable thing about the home screen is that the background, which has clouds on the top and bottom of the screen is animated. Clouds are floating across the screen, which also helps the little bird, giving it more of a flying effect.

Going deeper into the application, you’ll find your standard set of Twitter features. The settings menu can only be accessed from the Twitter home screen, and there you’ll find the usual settings. One thing you will not find in this application is the ability to customize themes. While this is something that I thoroughly enjoyed with Twidroid, I can see why the official application leaves it out. Twitter wants it their way, and that’s fine. But, that’s not to say that they won’t add in a themes option in a future update.

The Retweets button allows you to view retweets from you, others, and view which tweets you’ve sent out that have been retweeted. Simple enough, and like I said before, nice and clean. Going into Direct Messages is just as simple, separating your inbox and outbox of direct messages. When going into any of the options from the main menu, a title is presented of said screen with another, static little bird in front of it. Clicking this will bring up more options for you. It did take me a little bit to find this out – as an Android user, if you’re not sure where something is, you usually press the Menu button. It’s not a bad thing, but some may miss it.

The official Twitter application also comes with widgets. Widgets are one of my absolute favorite things about Android, and I was excited to see they had added one into the application. Too bad I was disappointed.  There are two options, large and small, and they are like the rest of the application, simple. Coming from Twidroid, I used the large widget a lot, and liked out it displayed more than one person’s tweet at a time, and the option to press the button up and down will give you a new set of four or five tweets. The official widget is almost exactly like the Facebook widget. While it’s simple and functional, it’s less aesthetically appealing to me. In my eyes, nothing beats HTC Sense’s Peep Twitter widget.

There are other features I have not touched on, but this is what I’ve gathered from playing around with it for a couple of minutes. For those who have used it, what do you think? Is the official Twitter app the end-all Twitter app? Leave it in the comments! I know I’m not going back to Twidroid!

The official Twitter application is on the Android Market, and only works for Android 2.1 (supposedly)

Wondering if you should grab a Google Nexus One or a HTC Droid Incredible as your next Android phone? If...