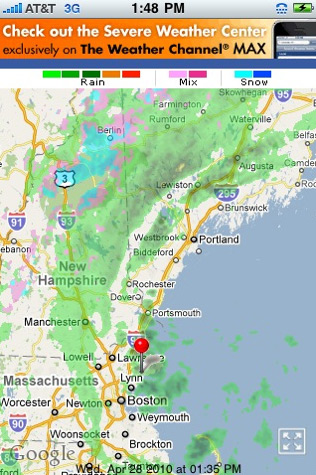 You may recall the other day my post about The Weather Channel app for Android. It was recently updated with some cool new features, including new graphics, new desktop widgets, and much more. If you missed it, you can check it out right here.

If you’ve never used or tried The Weather Channel App for iPhone, you may want to give it a spin. Key features include:

The Weather Channel App for iPhone is free, and yes, there ARE ads inside. If you’d rather pay a few dollars to ditch the ads, you can get The Weather Channel Max, which ditches the ads, and includes many new features including saved locations, exclusive TruPoint maps, a video center, and a LOT more!

Press release after the jump.

“10 million users is a great milestone for our team.  It validates our belief that providing the most accurate, up-to-date weather information available is what matters most to consumers.  The Weather Channel offers exactly that when and where they need it – which is to say anywhere, on the go and at your fingertips,” said Cameron Clayton, vice president of mobile for The Weather Channel.

No stranger to big numbers, The Weather Channel mobile applications remain the most downloaded and top used applications, no matter what platform and device is used.  TWC’s mobile product portfolio includes TWC mobile Web, the number one mobile content site in the United States; a full line of multimedia and messaging offerings; and download products such as the No. 1 free weather application on iPhone, Android, BlackBerry, Palm, and now iPad, which offers location-based, customized weather information, an extensive index of maps, enhanced video center and severe weather alerts at the tap of a finger.

The Weather Channel application for iPhone pinpoints users’ exact locations and weather conditions, allowing users the ability to personalize their maps with the weather layers and neighborhood landmarks that are relevant to their daily routine. Users can personalize relevant locations, share weather conditions and alerts with contacts in their address book, and view local, national and international video forecasts with TWC meteorologists. The application features patented TruPoint technology from The Weather Channel that provides detailed weather conditions accurate up to 2 kilometers, making it the most accurate weather information available.

The Weather Channel continues to enhance its mobile weather applications.  The iPhone app will soon get an update to include full-screen maps, seasonal weather information, a new sliding toolbar and new ad products.  The premium app, TWC Max for iPhone, will also soon see a new launch with an entirely new UI and much more.

TWC is the leader in cross-platform usage.  Of all media brands, consumers use TWC the most across all platforms – television, online and mobile.  TWC reaches more than 100 million households on television and more than 42 million unique users on its digital properties.