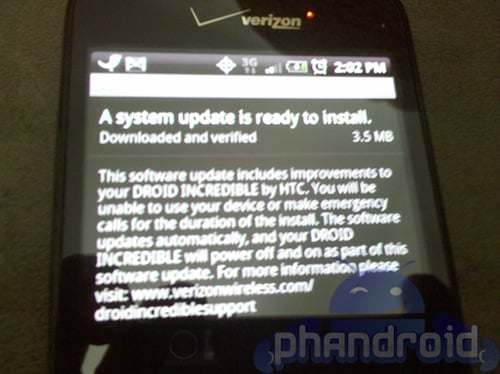 The Droid Incredible hasn’t even been out a full week, and since then its first batch already sold out online in a couple of hours. Today, we’re hearing that it’s beginning to receive its first OTA update already. There’s noting too notable, nor noticeable about the OTA, but the small update should help in some way. Droid Eris users, deep breaths.

The update is relatively small; it’s only 3.5 MBs big. So chances are it’s all back-end fixes that are taking place. If you check out the About Phone section in the settings menu, you’ll notice that the build number has changed from  xxxx493 to xxxx494 after the update. There are rumors that the updated fixes the signal strength bar on the notification bar, so it will be more accurate, but that’s just rumor at this point, and the OTA could have nothing to do with it.

The OTA notification has only hit select Droid Incredibles at the moment. This could be the beginning of a roll-out update for the device, or it could be just for those who had pre-ordered them, with the update already packed in to current devices you walk out of the store with today. In either case, I wouldn’t be too upset if you don’t receive the update, as it doesn’t look like it’s really tackling anything terribly important.

I’m sure some Droid Eris users may be a little annoyed. Since its launch alongside the Motorola Droid, the Eris has received one OTA update, two months after its launch, and it was no Android 2.1. Many of the people I know who own the Eris aren’t complete phone geeks like myself, so the lack of Android 2.1 doesn’t bother them that greatly. But only if they knew what they were missing out on…

Whatever the OTA may have lurking in it, it’s a small one, so don’t get too bummed out if you haven’t received it yet. If you’ve recently walked into a Verizon Wireless store and bought the Droid Incredible recently (and haven’t received the OTA), go into the About Phone section of your Incredible and see what the last digit in the build number is. Is it 3 or 4?

BlackBerry Bold 9650 gets FCC approval on way to Sprint