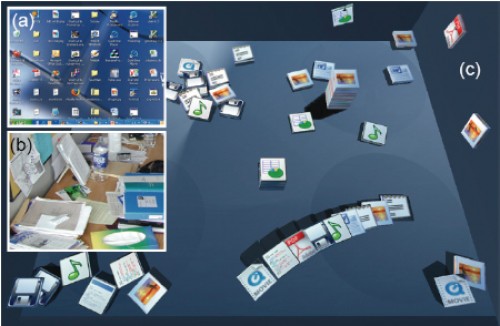 Just add this one to Google’s company acquisition spree, they’ have just acquired BumpTop. BumpTop is a popular 3D desktop ‘replacement’ of sorts, complete with just as much functionality as a regular desktop, but with a 3D layer to it. The company has recently been acquired by Google, and it may be added in to future Android or Chrome tablet devices – with dashes of multi-touch goodness added throughout the UI. The implications here are intriguing, to say the least.

BumpTop, as Wikipedia would describe it is a desktop environment that is designed to enhance traditional computer desktop functionality by more closely supporting the normal behavior of a real-world desk. It spruces up any boring desktop with a walled, 3D desktop. You can add pictures to walls, organize a handful of files with a simple mouse (or finger, if we’re talking tablets) gesture, easily sort crap from important files, and find them very easily when need be. From adding notes to a wall, or flinging an icon across the screen, BumpTop is not only functional, it’s really fun to use!

There’s a sort of physics simulation engine within BumpTop, giving it more of a ‘real’ feel to it. If you throw a file at a pile of other files, they will be hit, and move according to the speed of the hit. You can make certain icons bigger, which gives them more weight, so that file you just threw at the stack similar sized files won’t make the bigger icon budge. There’s also the ‘lasso’ gesture, where you click on an area, and circle around, selecting the certain files you want, and when you drag you mouse pointer to the center of the ‘lasso,’ it creates a nice little pile. You can also flip threw the files in a stack like a book. Another very useful feature is that if you want to find a file that could be anywhere on the desktop, just start typing. BumpTop will automatically find files that have the search term you’re looking for and will present them to you by highlighting them. (you can see a better explanation in the video below.)

BumpTop was pre-installed on my HP TouchSmart TM2, which turns into a tablet when the screen is swiveled down. It’s a nice experience overall, but I usually only use it when it’s in its tablet mode, and I mostly use my laptop as a tablet when I’m watching movies, so I rarely use BumpTop much, but that’s not to say it isn’t a great program. By acquiring the company, Google is positioned to give potential Android tablet buyers a nice ‘UI-lift’ from the stock Android we all know and (not all) love. But was there something else about BumpTop that caught Google’s eye that they could benefit from? Why yes, yes there was. Multitouch.

While multitouch is already enabled in some Android devices, BumpTop has implemented it in many other ways than the standard ‘pinch and zoom.’ As PCWorld points out, “Even if Google never implements a 3D desktop, these gestures could come in handy for Android or even Chrome OS.” Similar to what one could possibly do with Palm, if acquired. Palm has the IP to take on giants; one could have bought them, trashed WebOS, and still gotten a good deal on the patent portfolio alone.

Unlike the Google’s attempt at acquiring AdMob, this acquisition should go much more smoothly. BumpTop may not have any patents that could prove useful to Google, but they have implemented multitouch in ways that Google or Apple have added into their OS’, and this could be a good and bad thing for the big G. Big A will likely throw a fit, and I can’t wait to see what the future hold in this battle, or what Google plans to actually use BumpTop for.

Google’s been gobbling up companies like no other lately, hopefully we’ll see some of them surface within some of their services soon

Would you be interested in a BumpTop tablet? Let us know in the comments!

Check out the video to see BumpTop in action:

The Droid Incredible hasn't even been out a full week, and since then its first batch already sold out online...