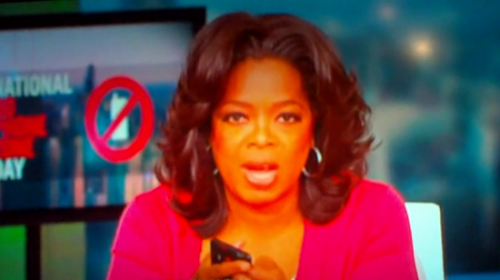 The Oprah Effect. All this woman needs to do is mention something, be it a book, product, or service of some sort, and you can bet your sweet ass it will get more attention than it ever could have without her. That’s the kind of publicity Sprint needs right now, and they just got a good dose of the “Oprah Effect” with their upcoming HTC EVO 4G Android phone. While she hasn’t explicitly endorsed the product, Oprah was spotted with an Evo 4G, and subtly gave it a name drop in a video.

Oprah is part of the  No Phone Zone campaign, which is sponsored by Sprint, Liberty Mutual, and Chevrolet. The campaign is aimed at making people aware of the dangers of texting or talking while driving. In a recent segment, Oprah showed her viewers how to text to make the ‘pledge’. All while using an HTC Evo 4G. While she doesn’t advertise the device, she does call it by name. That may not be enough to let the Evo get the attention it surely deserves, since it’s not even available, and many people probably have never heard the name before. Nevertheless, the Evo 4G has been outer by The Big O.

Once the device is out and unleashed into the world, it’s completely possible that Winfrey could endorse the Evo. This isn’t confirmed, but it’s likely that we’ll see the device again on the segment since Sprint is helping sponsor the campaign. If you thought Motorola’s Droid advertising campaign last year got users’ attention – which’ by the way, cost a lot of money – just having Winfrey saying that the Evo 4G is a good device would garner it more attention than the Motorola Droid ever had. In theory at least, it is the Oprah Effect after all.

If Oprah does indeed end up endorsing the Evo 4G, then that may send Android into the mass attention it needs to take on the iPhone. While I don’t want to doubt the power of Oprah’s word, I certainly don’t doubt the power of the cult of Apple.

With Android's fragmentation issues, there has been a lot of concern when it comes to updating a device, especially when...