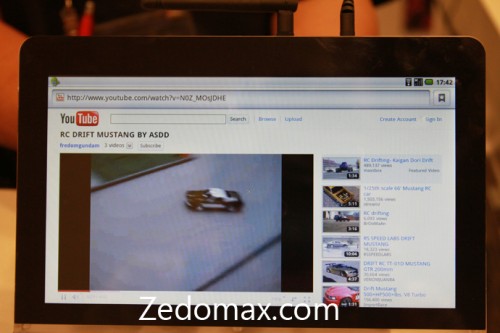 The Web 2.0 expo is being held here in San Francisco this week, and at the Adobe booth, an Android tablet is being shown off running Adobe Flash and Air ‘flawlessly’ as Adobe would put it.

What we have here is a prototype Android tablet. It’s still very much a prototype, as it’s still in a small Plexiglas casing, and nothing about the hardware looks finalized. Software on the other hand is quite the contrary. The mystery Android tablet is running on Android 2.1, and has full Flash and Air support. ZedoMax blog had a chance to get some hands on time with the tablet, and gave us a sneak peek of what’s to come with Flash and Air in Android devices.

Flash was displayed running on the tablet in the form of a YouTube video running natively in the browser without a hitch. While the video played perfectly, it would be interesting to see how Flash performed when the device had been used heavily with multiple applications running in the background. Wired’s magazine application was also displayed on the tablet, which is made using Adobe Air. It ran as expected, which is to say that it ran perfectly.

Again, it remains to be seen how Flash and Air will run when the said device is being used heavily, multi-tasking with a ton of apps in the background, but from what we’ve seen, this looks good for Adobe. They need Flash to run perfectly on these types of devices if they don’t want to live up to Jobs expectations. Now, we’ve seen it run on a mystery tablet, and on the Nexus One through video. The real ‘test’ is how Flash will perform when it’s let loose into Android phones, and is available for anyone who’s device is compatible. It does look like Adobe has put a lot of effort into making the Flash experience a seamless one when it comes to these devices, according to these videos. But it’s in the real-world where it counts.

If you want a small taste of Flash on your Android device right now, we suggest that you check out the Skyfire browser in the Android Market.

The LG Ally is sure getting a lot of attention right now. Coupled in an advertising marriage of convenience to...