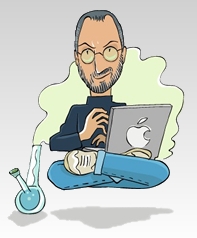 Fake Steve Jobs is on the roll. His latest blog post is awesome as he discusses reasons why Flash support will be removed from the OS X operating system. It’s a hilarious and a must read.

Among the reasons quoted we highlight:

In addition to Flash, he said that Gawker Media Web sites won’t not be supported in Safari, both on the iPhone OS and OS X. 🙂

Of course, technology reasons are to blame.

The same will apply to Google ads which were fine in the PC era, but now they just look ugly and Mac users don’t want them on their computers.

Finally, under iPhone OS 4.0, certain phone numbers will not work both for incoming and outgoing calls. If you call Apple to find out whether a certain number is on the blocked list, you will get the “That information is not available” explanation.