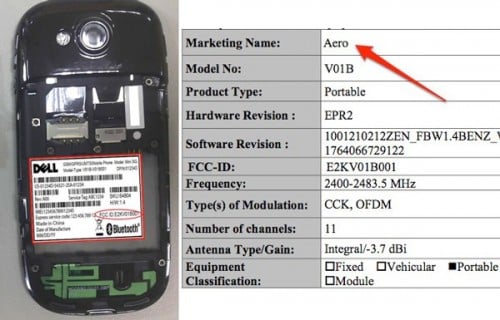 Dell’s first smartphone on US soil is confirmed to be headed our way in the form of the Dell Aero. We’ve heard a lot from this device, and now that it has made its way into the FCC, we can expect a Q2 launch date.

While the Dell Aero may not be the best device around, it’s nothing to scoff at either. AT&T is  probably going to lock this baby down, as with the Backflip, by not allowing out side of Android Market downloads. While we’re not positive on this, it’s possible. Possible feature lock-downs by AT&T aside, the Aero will come with the now standard WiFi b/g support, and Bluetooth. The Android 1.5 OS-powered Dell Aero will support 3G UMTS connectivity on the 850Mh and 1900Mhz bands – the frequencies used by AT&T for its 3G network.

The Aero supports handwriting recognition and comes with a capacitive stylus, and that could come in handy if you feel like really ‘writing ‘ on your device. But it’s things like a music store with DRM, and an older version of Android that could make the device less attractive to some.

It’s kind of sad to see the Aero when we know so much more is to come from Dell in the smartphone arena that makes up pee a little. The Aero is a first attempt, and it some ways it’s a fine phone, but in other ways it seems to have just missed the mark. Having a slower, 624MHz processor isn’t the end of the world, nor is a 5-megapixel camera with flash. If this device was released last year in November, it would be considered a high-end device.

Unfortunately, we’re now in May. We have seen devices like the Nexus One, Droid Incredible, and other upcoming phones that will just blow the socks off of this device. It’s not clear if the Dell Aero was intended for an earlier release, but it looks like this could be another $99 Android device from AT&T, which is surely not a bad thing at all.

While the Aero may be just another Android phone, it shows that Dell is really getting into the mobile space, and intends to stay there. The Dell Flash, however, is a very different story. If you can’t wait for the Flash to launch, then maybe you should consider the Dell Streak, which is certainly a whole-lotta phone.