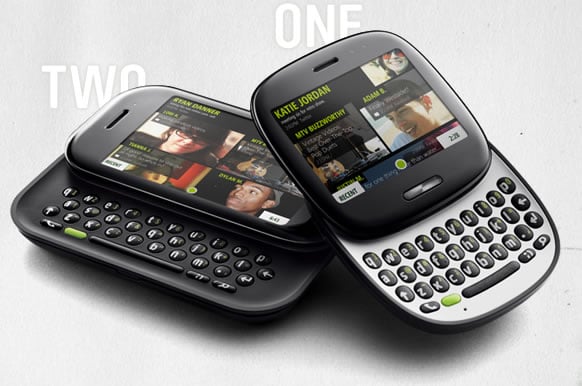 May 6 is here, which means the Microsoft Kin One and Kin Two phones are now available for sale on Verizon.The Kin One packs a 2.6″ QVGA touchscreen, GPS, 3G, Wi-Fi, a 5 megapixel camera with flash, and 4 GB of internal storage, while the Kin Two kicks things up a notch with an HVGA display, 8 megapixel camera, and 8 GB of storage. A cloud service is available on both that backs up and shares your pictures instantly, which is especially great since it will keep the full-sized pictures off your phone, so you’ll have plenty of room to play around with. If you have a Zune Pass, you can get access to your tunes on the Kin handsets as well – likely the first of much future integration in Windows Phone 7. The two main distinctionctive features of the Windows Phone-based OS is The Loop, a home screen which shows a slightly-delayed look at your friends’ updates on various social networkers, and The Spot, which is the little green thing at the bottom that lets you quickly and easily share a variety of content.  Check out Kin One and Kin Two hands-on videos for a closer look at the custom social networking-focussed operating system.

While I might not use one of these, the Kin phones are a good step in making dumbphones smarter, and bringing high-quality smartphone-esque services to the masses. The clincher for many folks will be the requirement of a $29.99 monthly data plan at minimum. For something that isn’t properly a smartphone, that’s asking a lot, but the hipster kids who will be attracted to Kin probably won’t know any better. The numbered names indicate we’re going to be seeing a lot of these in the future, so if the design doesn’t catch your fancy, hold out because a Kin Three is likely on the way. If you are diggin’ it though, go to Verizon and order the Kin One for $49.99 on contract, and the Kin Two for $99.99 on contract. If you’d like to dive into the specs, take a look at our shiny new phone widgets below.

With the Mother's Day around the corner, Verizon Wireless has issued a press release showcasing apps for moms. Here's what...