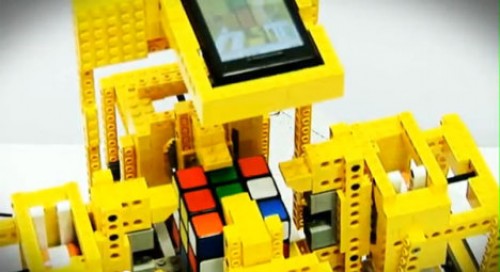 We’ve seen this before, but this time around we have the Motorola Droid powering a device that can solve a Rubik’s Cube. This isn’t the 4×4 that we have seen the Nokia N95 do before, but the Android powered version solves  the cube in about 25 seconds. Take that, obviously more difficult N95 Rubik’s Cube solver!

The Motorola Droid’s ARM processor is the brains behind the Rubik’s Cube ‘solver’. The contraption doing all the twisting and turning is a Lego built mini-machine with four clamps that turn the cube. The Droid is placed atop the machine to give it a bird’s eye view of the cube. With a custom-made application, the Lego-machine gets down to business, and it doesn’t take it too much time to get the cube solved. A little after 24 seconds and it’s done.

Well, chalk this up on another thing that Droid Does, but they made it look way too easy. As Phandroid points out, “Validity, you scream? Well, it does look like some software on the Droid was pre-configured to solve a specific cube setup (which is supported by the fact that they modified the cube before putting it inside of the machine.” So it’s possible that it could only be solved on a specific configuration, but nonetheless, it’s cool.

I’d need one of these little Lego-built machines – I don’t have the kind of patience for these kinds of puzzles.

Dell Aero caught hanging out at the FCC

Dell's first smartphone on US soil is confirmed to be headed our way in the form of the Dell Aero....