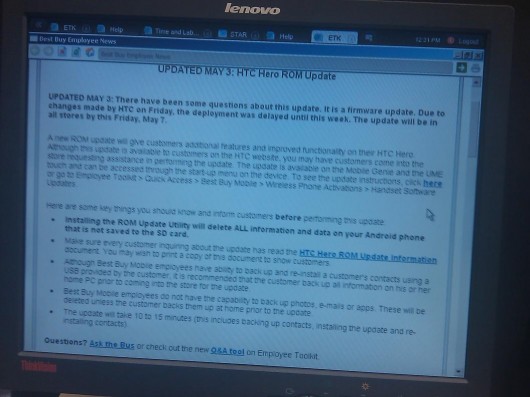 The Sprint Hero has been aching for the Android 2.1 update for sometime now. As with the Droid Eris, the Hero is still stuck on Android 1.5, and from what we’re hearing now, they still may be stuck a little longer.

The latest rumor pegged the Android 2.1 update to hit Sprint Heros in force on May 7th. Someone managed to snap a photo of an internal Best Buy document that does indeed indicate that the Sprint Hero should be receiving the update on the 7th. Sounds believable enough, right? Sure. Unfortunately, we’re one day away from May 7 and we’re now hearing that the Sense-ified Android 2.1 update will be delayed yet again..

On the Sprint community forums, the person who had found the picture posted it in a thread for all to see. Some were excited to see the picture, yet many remained skeptical. Nevertheless, the rumor was snubbed out by Sprint’s forum Admin, who closed the thread, but not before saying,”Closing this thread because I don’t want folks to think that 2.1 is coming out on the 7th.” Well shit. Can these guys get a break already?

I must say, if the Evo 4G launches and the Sprint HTC Hero is still without Android 2.1, I would go into a Sprint store and raise some hell.

But it’s not all Sprint’s fault. HTC is behind the software, and they have recently come out with a public statement apologizing to customers for the delay of Sense UI updates. That’s understandable enough, but that still doesn’t take away from the fact that HTC is taking so long in getting the Android 2.1 OS update rolled out to once-flagship Android phones that most deserve the update.

So, Hero users, how much longer are you willing to wait for your update? Or are you just gonna say screw it and get an Evo 4G instead?

We've seen this before, but this time around we have the Motorola Droid powering a device that can solve a...