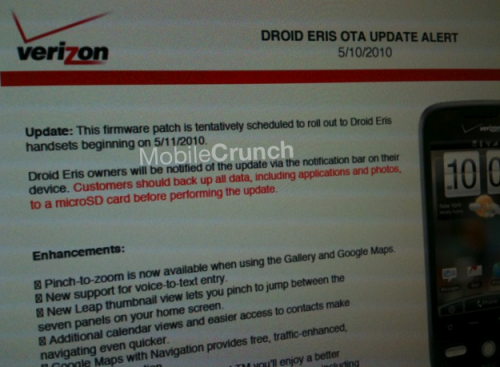 We’ve been told many things that have been taken back, and this latest rumor is no exception – although we hope it isn’t We have a picture showing that Droid Eris users may indeed begin to start seeing the Android 2.1 update rolling out to handsets via an over-the-air (OTA) update, starting tomorrow. Droid Eris users, you’ve waited long enough, and let’s hope it’s for real this time.

Now that we have this leaked internal Verizon document, the update launch windows does indeed look like the real deal. Some Droid Eris users haven’t been able to hold out for the official update, and so have been relying on custom made ROMs. Those ROMs can have many bugs. News of an official update should be music to those Eris users.

Still, users have been burned before. So, as legit as this time seems, I wouldn’t hold my breath – we wouldn’t want to get your hopes up and then have you throw your Eris across the room in frustrating if this rumor falls through.

While most Android devices aren’t as lucky as the Nexus One which gets updates pretty much as soon as their available – being Google’s official “superphone” helps in that regard – the Droid Eris has been especially lacking in the update department. While the Droid Eris has a sexier UI than regular stock Android, it’s still running on Android 1.5. The little green robot has done quite a bit of growing up since then, in more ways than one.

So what are you Eris users missing by not have Android 2.1 OS on your handset? Things like pinch to zoom in the Maps application (which will have turn-by-turn directions), an entirely revamped Android Market, a voice-to-text option anywhere you can input text, HTC’s very nice ‘leap’ feature that allows you to see all seven of your home screens with a pinch on the screen, and a double tap on the home button. There’s are more smaller features in Android 2.1, but hopefully you’ll be experiencing this for yourselves very soon.