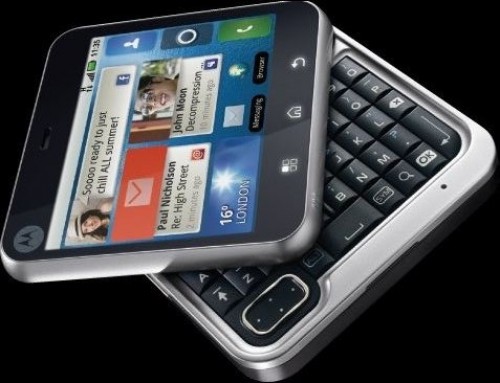 Remember that mystery Motorola device that was spotted last month? You know, the square-shaped, Motoblur device that no doubt resembled the LG Lotus, among other square phone attempts. Well, it now has a name, and it’s the Motorola Flipout. While this may be better than previous attempts at the square, swivel form-factor –  it’s powered by Android, and that gets bonus points in our book – the form factor is probably just a little too small for many of us.

What’s good here is that Motorola is trying to get any form factor they can into the mix when it comes to their Android devices. Rather than continuing to milk their proven smartphone successes, Motorola is actively diversifying their smartphone portfolio – that also gets bonus points in our book. With the recently spotted Android flip-style phone, MT810 which has sports both a capacitive and resistive screen in tow, we really shouldn’t be surprised that Motorola is taking on a squarish looking Motoblur device.

From what we know of the Flipout, it’ll sport a 2.8-inch display, full QWERTY keyboard, 3.1-megapixel camera, 512 ROM / 256 RAM, and a 700 MHz processor. Seems pretty nice for a lower-end, much smaller device. The keyboard looks to have a d-pad on the bottom left of the keyboard, which is so small it makes me wonder how well it will work.  What’s really stand-out about the device is that it’s running Android 2.1 under all that Motoblur crap. This alone is enough to believe that an update for existing Motoblur device can’t be too far away. But then again, delays seem to be pretty popular when it comes to updating Android with a customer UI running on top of it.

The Flipout has a rumored launch date of June, and will be available in three colors: Black, Green, and Pink.  While there are no carriers attached to the device, I could imagine it could sit nicely next to the Motorola Backflip, since they share some aesthetic similarities. With June right around the corner, expect to see more on the Flipout sooner rather than later, smartphone announcements – in the near future. We’re also expecting the device to be around the same price, if not cheaper, than the Backflip.

So what do you think about Motorola’s newest Motoblur device? A keeper, or sinker?

Sprint ditches Nexus One too

If you've been patiently waiting for the Nexus One to hit Sprint as promised, you're in for some bad news...