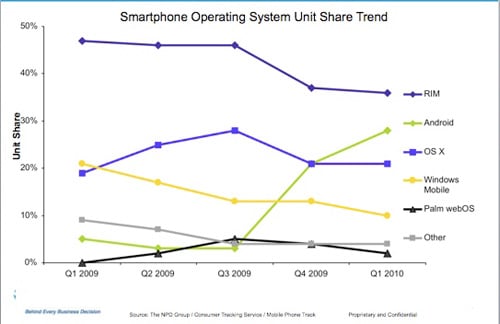 Now, these results are only taking into account U.S. The iPhone is still big in Japan – I’d be curious to see how Android would fare internationally in a similar study. Although they’re becoming less and less a part of RIM’s forward progress, the study also doesn’t take into account enterprise sales, which could further widen BlackBerry’s lead.

Now, I’m up in Canada, so can’t speak too much as to what Americans are seeing, but does this sound right to you guys? There are some hot Android phones out there these days, like the HTC Incredible, HTC Desire, the Quench, and a developer environment that enables some really cool stuff can also attract a lot of customers to the platform. Google’s done a good job of making its Android offensive multilateral in both hardware and carrier channels, so the numbers make sense in theory, but the iPhone has so much visibility that it’s hard to imagine Android’s beating it out.

U.S. Cellular is gearing up to launch the HTC Desire, but they've got a slightly lower-end Android handsets from Samsung...