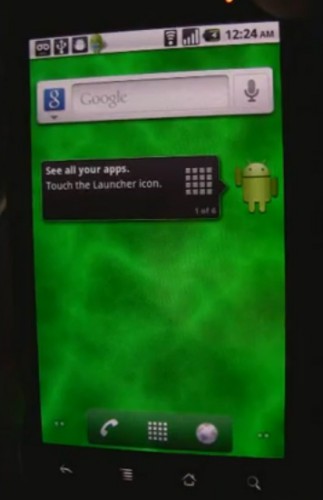 Well folks, we have our first picture of Android 2.2. The same video that showed us what Flash looks like on Android 2.2 OS is also good for a sneak peak at some handy new Android homescreen features. What we’re looking at here is a widget to launch your applications from the home screen. This photo was captured from the video that was showcasing Flash running on the Nexus One.

There’s not much to go by from what we see in the picture. But there’s plenty to speculate about. First off, the widget that says “Touch the launcher icon” also says “1 of 6.” What that could mean, I have no idea. It could mean that when the widget is touched, it brings up all of your apps, but only a certain amount at a time, and they are divided into pages. It could possibly mean something else, but that’s all we’ve got to work with at this point. Onward!

At the bottom of the phone’s screen, we see the standard launcher button, along with a phone, and browser icon. Everything seems standard and to the point, so it’s hard to really be able to speculate about this. My only question is if the two icons can be replaced by other applications. I have an application that allows me to have access to my browser from my notification bar (Bar Control), without having to hit home, and I like it that way. I’m really hoping that the option switch the applications surrounding the launcher is available.

Last, but not least, the Google search widget. There’s an arrow right below the ‘G’, which could mean that Google is now giving a user what search engine they want to conduct their search through. The option could also let you access your Facebook, or Twitter applications, and search them directly through the widget. Either option is good enough for me, and it doesn’t look like we have much more time to wait!

Tune in to IntoMobile on May 19th and 20th if you won’t be attending the Google I/O here in San Francisco. It looks like Android 2.2 may be announced, as we suspected all along.

Video: Flash 10.1 demoed on a Google Nexus One running Android 2.2 aka FroYo

FroYo, the codename for the 2.2 release of Android, promises to have built in support for Adobe's Flash, so we're...