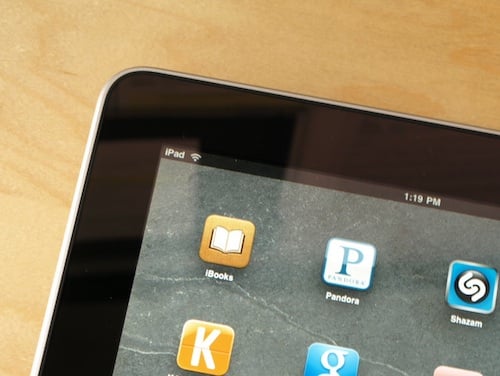 If you have been having WiFi connectivity problems on your iPad, it’s not your fault. We’ve had some issues here at IntoMobile headquarters and Apple has finally acknowledged the problem and promised a fix in upcoming software.

There’s no word on when the firmware update will come but hopefully it should be a relatively minor one, so you won’t have to wait until the fall for the iPhone OS 4.0 upgrade. In the meanwhile, Apple is offering a few tips that may boost your tablet’s connection speeds.

First of all, verify that you have the most current WiFi router firmware and this is doubly important if you’re using an 802.11n router. You may also want to change you security settings – Apple said using WEP wireless security may cause the iPad to randomly disconnect and switching to WPA or WPA 2 could alleviate this problem. You can also try renewing your IP address by tapping on “Settings,” then locating the WiFi network you’re on and tap the “Renew Lease” button.

Oddly enough, Apple also said adjusting your screen brightness could impact your WiFi connectivity. The company recommends increasing it from the lowest level and to turn off auto brightness. I have absolutely no idea why this would do anything, but if it fixes your WiFi-only iPad, more power to you.

Apple said the problem only impacts a “small number” of tablet users but this can be a crippling bug for such a cloud-centric device, so hopefully the fix will be coming soon. Still, it’s merely a small bump in the road for Apple, as the iPad has already sold more than a million units and is well on its way to generating $1 billion for the company in the quarter.

Some iPad apps inconsistent, difficult to use, says study

One of the iPad's greatest strengths is its ability to download new programs from the App Store but a new...