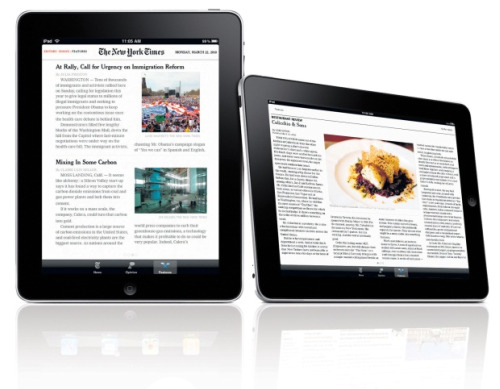 One of the iPad’s greatest strengths is its ability to download new programs from the App Store but a new study from the Nielsen Norman Group found many of these apps can be confusing because there’s no consistent interaction design.

In the study “Usability of iPad Apps and Websites. First Research Findings,” the firm said many iPad apps use different user interfaces that can be puzzling. For example, the Wall Street Journal and New York Times have tablet apps full of high-quality news content, but the WSJ’s is a pain to navigate. It’s just plain clunky and there’s no way I’d pay $17 a month for that mess.

“It’s the Wild West all over again in interaction design,” said Jakob Nielsen, principal of Nielsen Norman Group, in a prepared statement. “We’re seeing the same thing we saw 17 years ago in Web design when anything a designer could draw could be a user interface whether it made sense or not. That’s happening with the iPad apps. Anything you can show and touch can be a user interface on this device. There are no standards or expectations, and users just don’t know what to do, or even what options exist.”

Now, let’s not go too crazy because a lot of these studies are pumped out to benefit the originating company. This one is no exception either as I’m sure the Nielsen Norman Group will help you develop a “better” iPad app for a consulting fee, but these findings do ring true from what I’ve seen on Apple’s tablet. Part of this is just the growing pains of a new market, I’m sure, as the app creators will get more familiar with how users want to interact with apps on a large screen.

When the iPad was introduced, many were hoping Apple would implement an iBooks-like system for newspapers and magazines. I’m actually glad it didn’t because now app makers have more freedom to experiment with UI and design. Let the best one win.

The Federal Communications Commission is trying to do consumers a solid by tackling the issue of "bill shock" - opening...