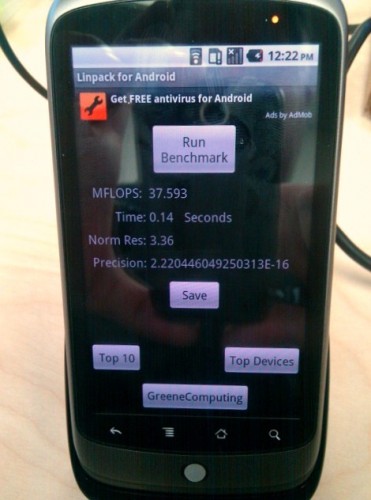 We all know that Android 2.2 is coming. With Flash 10.1 support, automatic application updates, and many other things on board, we have to wonder: what about speed? Well, someone took it upon themselves to benchmark the newest Android version, and it turns out that Android 2.2 OS is faster than anything we’ve ever seen.

When I used to hang out at the XDA developers forum, the word JIT was thrown around a couple times, which was supposed to make a ROM faster. It was badly implemented most of the time, and broke ROMs quite often. What is this JIT, you ask? Without getting too technical, JIT compilers allow your mobile phone to process code more efficiently. This speed-boosting JIT (Just In Time) compiler will be added into the next flava’ of Android. It’s like a performance boost, only on steroids, and it will be added to Android’s Dalvik – VM in Froyo.

A developer from Armor Games, Ian Douglas, took it upon himself to put a Nexus One running Eclair and then Froyo through their paces. The benchmark is done in MFLOPS. If you’re not too savvy on MFLOPS, don’t worry, not many people are. But the numbers say it all. The stock Nexus One running Eclair got around 6-7 MFLOPS. The Nexus One with Android 2.2 running got somewhere near 38-40 MFLOPs. Sadly, the HTC Hero only gets about 2 MFLOPS.

The JIT compiler is, well, coming just in time for Android. With my Nexus One, speed has never been an issue for me, it’s a snappy device on it’s own right now. Android is definitely growing into a powerhouse of an OS, and not many other mobile OS’ can boast such functionality. I can only expect what else Google will announce in Android 2.2, but all I want is to get my hands on it, play around with some Flash video, and update all my apps in the background, all at the same time.

You can only wonder what kind of evil Bond-esque mastermind runs T-Mobile when they use codenames like Project Dark and...