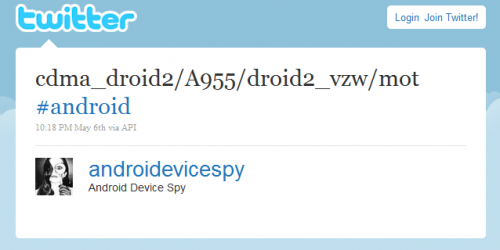 There had been a rumor saying that there will indeed be two models of the Shadow. If all goes right, that rumor could definitely could turn out true. The new device has received the model name “A955,” where the original handset’s model number was A855. Pretty similar, right?. This really could be the Droid 2 we’re hearing about this time around. But how similar is it to the Shadow?

I think it may be a little too soon for Verizon to release a Droid 2 right now. Not because of timing between the original Droid, but it would take away from the Droid Incredible, which is an amazing device on it’s own. Since we just have a WiFi certificate, the device being in store could be a long time from now. All that said, it’s still about time that Motorola put out a device that’s not crap.

I still firmly stand on the belief that the Motorola Shadow will be the Nexus Two, but is it possible for Google to have their own device, slightly modified, and have a very similar device, renamed, and on a carrier? It’s possible, but this is all speculation and we have nothing to really go on besides WiFi certificates and model numbers that are similar.

I don’t think we have much more time to wait on at least one of these devices to be announced. Google’s I/O conference should be a great time to announce a Nexus 2, and possibly give some out. Eh, Google?

What’s your take?  I may be wrong, but I’m still hoping the Shadow is the Nexus 2.

We all know that Android 2.2 is coming. With Flash 10.1 support, automatic application updates, and many other things on...