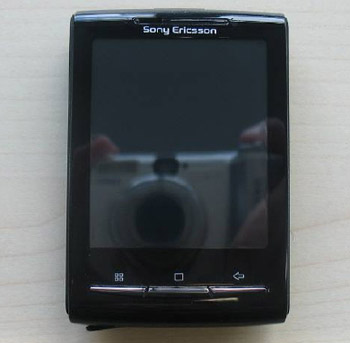 As you know Canada’s Rogers Wireless plans to include the Sony Ericsson Xperia X10 Mini and X10 Mini Pro to its portfolio. Hence, the device needs to clear FCC’s process first and that’s exactly what happened. However, instead of the version with 850/1900 MHz UMTS, we have the European X10 Mini (with 900/2100 MHz UMTS) getting an FCC approval. Go figure.

Anyway, I’m sure if Rogers is determined to launch the device(s) in Canada, Sony Ericsson will do all that’s needed to help them on that route. So I would expect to see the X10 Mini (and X10 Mini Pro, for that matter) with proper 3G bands passing the FCC hurdle in the near future.

As a reminder, both X10 Mini devices are younger brothers of the original Xperia X10, and both come with Android 1.6, QVGA touchscreen, 5-megapixel camera, WiFi, GPS and so on. The only difference between the two is that the X10 Mini Pro rocks a full side-sliding QWERTY keyboard, whereas the X10 Mini doesn’t.

Sprint took to the mean streets of New York City to launch their flagship Android phone today - the Sprint...