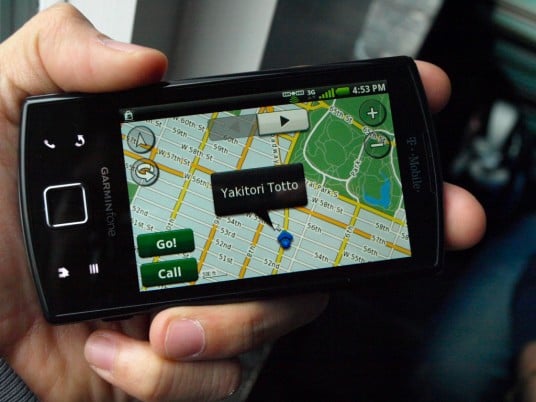 T-Mobile and Garmin held a press event the other night where not only did we get some hands-on time with the Garminphone, but it also involved a lot of running around NYC in order to get a first hand look at how the Garminphone’s walking GPS capabilities work.  To be more specific, it was to chase down a diabolical squirrel who had stolen all of our Mets tickets and hid them somewhere in Central Park.  The squirrel’s name is still unknown, but his ransom was serious.  In order to make it to make it to Mets game, we were going to have to play his little game.

The first clue that was given to us was by way of a video that was recorded with the Garminphone’s 3-megapixel camera.  We were instructed to make our way to the nearest police station from our starting point in order to report the missing tickets.  Pulling up the Garminphone’s map, I could search for point of interest, to which I searched for ‘police station’, and I was given a number of different locations within a couple of miles.  Since I was making my way around NYC by foot, I chose the police station that was a couple of blocks away and my adventure began.

Upon arriving at the police station, we were instructed to send a video in order to report the crime (I guess since police officers take video emails a bit more serious than an in-person report). Once the video was submitted to the local authorities, a police Lieutenant responded by informing us of who the criminal behind the theft was by way of text message.  The Lieutenant instructed us to make our way to a local sports memorabilia shop as that was the next demand from the dastardly squirrel.  In the text message was the address of the store, which I clicked and it immediately had the route ready for us.

The sports memorabilia store was a couple of blocks away, but it was at this point that the Garminphone started to give me some trouble.  While I was walking, the compass would point in a direction I was not facing, and worst yet, it would give me directions that were different from my teammates’ which led to much uncertainty in which route was the correct one.  With my knowledge of navigating the mean streets of New York City, I decided to no longer listen to the Garminphone and make my way to the current destination.

Once we made it to the sports memorabilia store, we were told to pose for a picture while holding up a Mets banner, gnome, & hat to show we were true Mets fans.  I just hope that squirrel doesn’t decide to upload that picture anywhere as holding up such merchandise would definitely ruin my street cred, if I have any at all.  The squirrel was pleased with the picture, and then instructed us to pick up some nuts for him which would be traded for the stolen tickets.  The address of the nearest ‘Nuts 4 Nuts’ stand was included in the email, which as soon as it was clicked, would map out the route instantly.

Once we made it to the Nuts 4 Nuts stand, albeit with a couple more navigation problems similar to what I highlighted above, we were instructed to submit a picture of us holding up the nuts to prove to the squirrel we had the goods he so desperately needed.  The squirrel was pleased with our offering, and sent us a geotagged picture of a rock in Central Park.  While the picture was open, a small pin icon displayed at the top-left corner of the screen, indicating we can pinpoint to where the photo was taken by pulling up its geotagged info.  We clicked on the pin, and a new destination popped up to the rock in Central Park.

When we started our journey to Central Park, that is when things with the Garminphone went from ok to bad.  Everyone in my team was getting completely different routes to follow which led to a lot of uncertainty.  The compass not only was pointing in different directions at any given time, but it would also jump all over the map which would result in a false route.  One thing I was impressed with was how the Garminphone had the walkways in Central Park mapped.  I just wish it would have given us the correct route so we wouldn’t have had to wander around aimlessly hoping we were going in the rig direction.  We eventually did find the rock without navigating to the middle of a pond, since we all know if a GPS device tells you to jump into a pond, you’re pretty much expected to do so.

Once we found the rock, we stumbled onto a creepy looking Mexican fellow who so happened to decide to take a little siesta next to the very rock we were looking for.  Our team crept past the possible illegal and made our way to the squirrel’s hideout underneath the rock.  There we found the squirrel as well as our tickets to the Mets game.  The squirrel played coy the entire time of the transaction.  Kind of like he was a stuffed animal, but I’ve seen squirrels play this game before.  One second you think a squirrel is a stuffed animal, the next he’s ripping your throat out with his adorable little chompers.  I knew it was best to leave the nuts, take my tickets, and be on my way.

The Garminphone has potential to be a good GPS phone for those of you who need a hybrid of the two.  Seeing it in action in a vehicle is one thing, but if you’re the kind of person who usually navigates on foot, as most New Yorkers do, you could end up with a lot of frustrating moments and possibly being branded the jerk who still can’t get to work on time since their Garminphone keeps giving them bogus directions.  I don’t know about you, but I rather be known as the jerk who thinks he knows it all because he’s always prompt to appointments.

Ever since we got a look at the Samsung Galaxy S, we've been wondering where it will land. Well, we...