If you’re in the UK right now, we suggest you find this easter egg Google has planted for you. All one needs to do is go to Google (UK), type in ‘Meet Android’, and press I’m feeling lucky. Now watch as the green Android tears through your search.

It’s basically an ad for the Nexus One for Vodafone, but it’s a good one! I’m not sure we’ve ever seen the little green Android move so much! I like the ad, it leaves you wanting to know more. It’s not clear how much better it will be from a dollars and cents perspective, but we’d bet that it will perform a little better than a plain link below the Google page, as they have done before. Unfortunately, the new ad is only for UK users, and requires a little more effort to access.

After the ad’s animation is done, you’ll be presented with two links from Vodafone: one to learn more about the Nexus One, and another to learn more about their other available Android devices. Clicking the latter link will make any American Android fan envious of the carrier’s options. Right now, Vodafone currently carries the HTC Tattoo, HTC Legend, HTC Desire, and the Sony Ericsson X10. Talk about a line up! The Nexus One is the only stock Android handset offered on the carrier, but it sure rounds out the amazing set of devices that Vodafone offers. Oh yeah, did I mention Vodafone is offering the Nexus One for free?

While the US has a decent selection of Android device, not one carrier holds the portfolio that Vodafone boasts today. As far as quality Android devices go, Verizon is the better choice. T-Mobile has the most, Sprint has a couple, and AT&T only has one, and it kind of sucks.

If you’d like to experience the ad yourself, head over to Google.co.uk, type in “Meet Android,” click I’m feeling lucky, and enjoy! 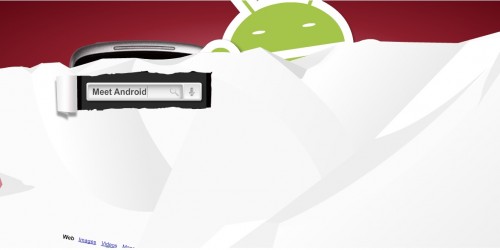 We knew Android has been growing at a rapid pace, and typing that sentence is getting a little repetitive. Nonetheless,...