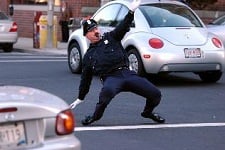 The drama continues in the saga of the lost/stolen next-generation iPhone, as unsealed court documents show there was a lot of shady stuff beyond a dude losing the phone in a bar.

Brian Hogan, the guy who found the phone and was paid at least $5,000 to give it to Gizmodo, maintains that he found the prototype at a German beer bar in the San Francisco Bay Area, tried to return it to Apple and then sold the rights to access the device. It’s a very convenient story that just sounds way too crafted and polished to be true.

The day after the “iPhone HD” story was posted, Apple went to the local police and said that the prototype was stolen and extremely valuable. The company’s attorney said that people who would have bought the current iPhone are now waiting, which has a significant impact on its sales. This is kind of an out there claim in my book because pretty much anyone who reads sites like this or Giz know that a new iPhone always comes out in the summer.

Nonetheless, the police received a search warrant for Hogan’s house and the home of Giz editor Jason Chen because of the potential that a felony was committed regarding the selling of stolen property. The great part is that Hogan’s roommate totally blows holes in his BS story. The roommate said “Hogan understood that he possessed a valuable piece of technology and that people would be interested in buying it. He subsequently contacted … in an attempt to start bidding for the iPhone prototype.”

The warrant also said the roommate “believes he [Hogan] was aware that selling the phone to a magazine would hurt Apple sales and/or profits.” When his friends tried to discourage him from selling it because it could ruin the career of the Apple engineer who lost it, Hogan reportedly said, “Sucks for him. He lost his phone. Shouldn’t have lost his phone.”

The court document also said that Hogan and a cohort were “attempting to conceal/destroy evidence” once they got wind of an investigation. That’s scumbag stuff folks.

We’ll be sure to keep you up to date on the upcoming twists and turns, as this isn’t going away quietly.

[Via CNET, Check out full document]