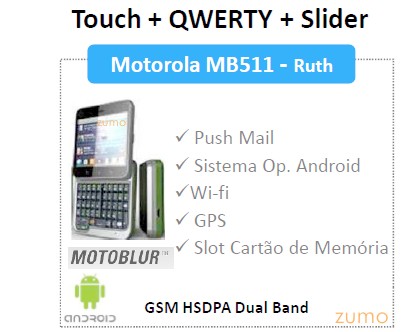 The Motorola Flipout is one of the more interesting Motoblur devices we’ve seen thus far. Following on the Flipout leak from not too long ago, we’re beginning to see the device again. This time around it’s from Italian site, Zumo.

The site is calling the device Ruth, a name we’ve previously never heard mentioned in reference this particular Android phone. The Flipout “Ruth” also bears the model number MB511. The small ad for the device says everything we’d expect from pretty much any Android phone, featuring Push Email, Android OS, WiFi, GPS, and a memory card slot. Nothing to revolutionary to see here, folks. Zumo also reports that device should be coming sometime in June of this year, which we’d said before.

I’m not much of a Motoblur fan, and the form factor of the phone makes it even less appealing to me. It’s good to see Motorola trying to get out absolutely any form factor they can get away with, but I’m just not feeling this one – which is not to say the Flipout will do badly in terms of sales, as I could see many people finding this attractive. It’s small, and it’s kinda cute, but I need power behind my devices. This is where this device will surely fall short.

Still, Android is meant to run on various hardware and price points, and I’d expect this device to run relatively cheap.

The Ruth does sport Android 2.1 though and that’s better than any other Motoblur device we’ve seen yet – a definite upside to this small, quirky phone. Also, this could hint at the possibility that the existing Motorola Backflip, Devour, Cliq, and Cliq XT could be receiving the update in the near future.

While we’re waiting for Motorola to announce another high-end Android device, they seem to biding their time with odd-shaped phones. That’s fine for now, as long as they deliver the goods at some point in the near future.

Android tears through your Google search in the UK, literally!

If you're in the UK right now, we suggest you find this easter egg Google has planted for you. All...