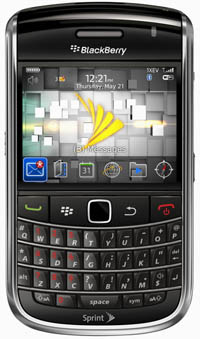 Here’s an interesting BlackBerry OS update for anyone that has their eyes on the upcoming BlackBerry Bold 9650. The device hasn’t even been launched yet, however, that hasn’t stopped the folks from Sprint from releasing an official OS for the device. What gives!? 🙂 Adding to the strangeness of it all is how it was posted on the BlackBerry Software Downloads page. Initially (it has since been fixed) the update was pegged as ‘Software for BlackBerry Tour 9650). I guess we’re all a little befuddled by the rebranding… But going with the Bold branding makes a heck of a lot of sense to me.

Note: In case you were wondering, we’re expecting the Sprint BlackBerry Bold 9650 to arrive in about a week. Verizon? Yeah, we should see the 9650 up-and-running on their network in a few weeks.

The EVO 4G's pricing may have been announced just yesterday, but now we're hearing some even better ways on how...