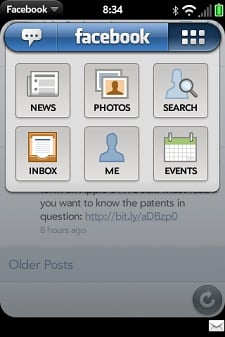 Facebook and Palm have released an updated version of the social networking application for webOS devices and it’s a relatively minor one that focuses on squashing bugs.

The Facebook app for the Pre and Pixi is a solid way to update your status, look at the news feed, browse your friends’ updates and upload photos. It’s still lacking compared to the iPhone and Android version, as it’s still not as easy to throw captions on your mobile photo uploads. What’s new with the update?

So, nothing major here, but this is what we call a “news peg,” as I really just want to disparage Palm’s phones. My Motorola Droid is now out of commission and I think I’ll just wait a few weeks and hop over to Sprint for that sexy EVO 4G. In the meanwhile, I have a shiny Palm Pre Plus for Verizon to futz around with and I forgot how annoying the hardware can be.

Don’t get me wrong, I think webOS is a visionary platform and the best 1.0 smartphone operating system I’ve seen but it’s downright painful to use the Pre. The keyboard is too small, the input software isn’t as intelligent as I’d like it to be and the screen’s responsiveness leaves a lot to be desired. The rounded edges do feel good in the hand, though and I like the overall weight of the device. Still, I have no idea why AT&T thinks it can get users to shell out $150 for this.

After using the Pre as my primary phone for a few days, it’s not much of surprise that it couldn’t survive as an independent company. Now that it has weight and cash of Hewlett-Packard behind it, let’s hope we finally see webOS on some drool-worthy hardware. The thought of Palm’s OS on a 4.3-inch screen with a 1 Ghz processor is a wonderful thing in my book.

[Via Palm, hat tip to PhoneScoop]

As expected, Slacker Radio is preparing to unleash a major 2.0 update to their iPhone app that will bring with...