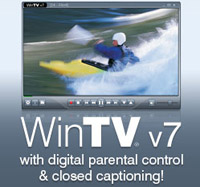 Hauppauge Digital, developer and manufacturer of TV tuner products for personal computers, wants a piece of the iAction. So they’ve announced that their WinTV-HVR TV tuner boards for PCs can now stream live TV over the Internet to the iPad, iPhone and iPod Touch; or any other Mac computer for that matter.

The streaming is provided by Hauppauge’s WinTV Extend, which is actually a feature in Hauppauge’s brand new WinTV 7.2 application. WinTV Extend transmits live TV to Internet and WiFi connected devices so you can watch it even while on the go. In that sense, it does pretty much the same thing as Slingbox.

Once everything is set, the live TV image can be displayed alongside the TV tuner channel list from your WinTV-HVR at home. Moreover, you can switch between the display of the TV channel list and live TV.

The WinTV v7.2 application will include WinTV Extend and will be available directly from Hauppauge for $9.95. Current owners of WinTV-HVR’s can upgrade to WinTV v7.2.

Summer is approaching and who knows, you may end up on Ibiza partying all night long. Pacha, the 43-year old...