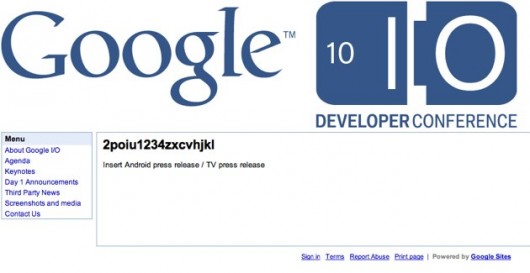 If you’ve been keeping up with the goings on here at IntoMobile, then you wouldn’t be surprised if tomorrow Google announces a partnership with Sony, and they start pimping their own Android TV set. To make it even more solidified, a bit of tinkering with Google’s press site hints at a launch tomorrow.

Jason Kincaid of TechCrunch put some geek skills to action, and found a link not yet open to the public. At least, it wasn’t supposed to be found yet. Not much is said on the page, but we still see what we were expecting. “Insert Android press release / TV press release” is found on the page – what more confirmation do we really need at this point? Even Google’s Vic Gundotra himself said that they have more than one surprise lined up for tomorrow. Well, obviously there will be an Android announcement. Two? All signs point to the Android television that’s been rumored. I actually hope I’m wrong and that the surprises are totally different than what we are expecting. Don’t get me wrong, I’d love to see Android 2.2 and the Sony TV, I just hope there will be some surprises that may well actually surprise us.

This is an insanely smart move for Google. Streaming video from the internet would just give us another reason not to leave the couch, and more intriguing are the endless possibilities. To have the ability to watch movies, download apps, and even play games using just your television sounds like a hit already. But how will it be executed? No doubt, if the TV set is running Android, there will certainly be some sort of customized skin for it. Stock Android on a TV probably wouldn’t go over too well with everyone, but some may be just fine with it. I’d imagine Google has been working on this for a while, in close partnership with Sony. I’d love the option to have the Android Market on your television, download applications, and sync them with your Android powered phone. That sounds like a long shot, but damn that sounds nice!

Well, since this is pretty much a confirmation, I’d say we can check off the TV from out Google I/O preview post. We know Android 2.2 is ready to come out, so there’s another check. Sadly, the one other thing we mentioned that we’d like to see is the Motorola Shadow debuting as the Nexus Two. We know, that’s pretty specific, but I couldn’t imagine another way to get people even more pumped for Android than this, on top of everything else. While this may not come to fruition, I’m keeping my fingers crossed.

Google is not messing around when it comes to location-based services, as the search giant has just introduced an application-programming...