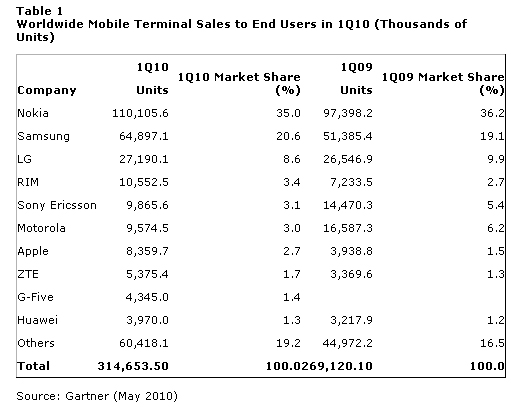 Gartner has published some of their findings for Q1 2010 mobile shipments by manufacturer, with numbers that line up nicely with IDC’s research for the same period. As you can see, RIM is now firmly planted in the number four spot of all mobile manufacturers worldwide (3.4% market share), a placing agreed upon by two independent studies. Although Apple still has some catching up to do (2.7%) with BlackBerry’s market share, they’re making excellent progress, having more than doubled their unit shipments since last year (3.9 million vs. 8.3 million). Nokia continues to float up in the stratosphere with its interminable legions of featurephones (35%), followed by Samsung (20.6%)  and LG (8.6%). These Q1 numbers differ slightly from iSuppli’s, who put Sony Ericsson’s shipments just a bit above RIM’s and Apple and ZTE above Motorola, so take it all with a grain of salt. 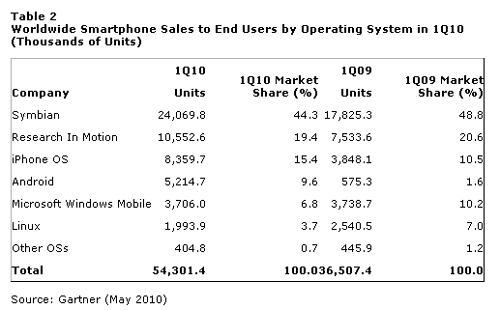 Good on BlackBerry and iPhone for capturing such a significant portion of the global mobile market with smartphones alone. ABI says that smartphones in particular grew 25% last quarter, while the industry overall, according to Gartner, has grown only 17%. If smartphones continue to outpace lower-end feature phones at this rate, I wouldn’t be surprised to see RIM overtake LG this time next year and claim the number three spot.

If you've ever needed to reboot your BlackBerry to free up memory (we all have), many will know of the...