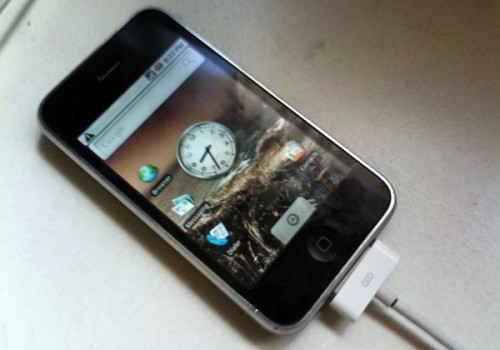 For those iPhone 3G users who feel burned about not being able to receive multi-tasking on your iPhone 3G with the iPhone 4 OS update, you now have another option. We’ve seen Android working on the 3G before, but now it’s available for download and get all of that multi-tasking Android goodness.

The port is still a work in progress, it’s best if you have at least a little experience in hacking your device. If you’re completely new, that’s ok too, since PCWorld has a how-to available.

The lack of buttons on the iPhone could surely make the Android experience a little annoying at times. Also, there’s no hint of any power-management, so Android on your iPhone 3G will likely drain the batter after an hour or so on a full charge. The iPhone should be jailbroken, and it needs to be done on a 32-bit system; they suggest you use Ubuntu.

There’s a fair amount of work to do just to prepare the thing to be ported, with the heavy duty stuff to be done later. But after all is said an done, you’ll have an iPhone that dual boots the iPhone OS and Android. While Apple tries to take away choice from users (apparently for your own good), Android is all about choice, and now it’s seeping into the closed off iPhone in the best of ways. But at the moment, there’s just too much work to do to get it on the iPhone, and hopefully there will be a way to port it easily in the future. In either case, you now have a choice, sort of.

If you’re brave enough to try this out, tell us how it went in the comments below. If you can get over the odd arrangement of button mapping, we’d like to know if Android performs relatively well on the iPhone.

You can download the build here, and find the how-to here. Happy Hacking!

AT&T will be raising its early-termination fees to $325 in June in what could be an effort to keep iPhone...