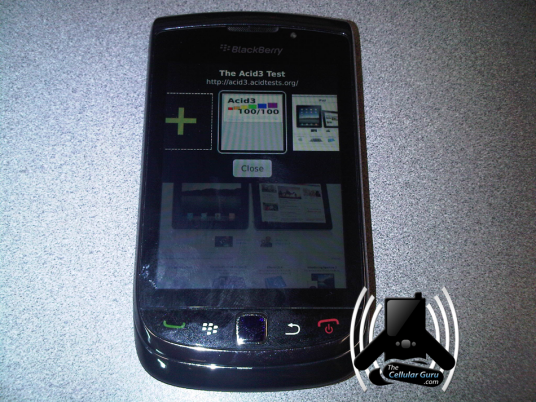 A few new pictures of the unreleased BlackBerry Bold 9800 slider have surfaced, showing off the new webkit browser, though there’s not much to see other than the Acid3 test scoring 100% as demonstrated at MWC. The new browser is going to be a pretty big deal for RIM, and has been wholly facilitated by their acquisition of Torch Mobile and their Iris browser. Flash is pretty much guaranteed to be included as a part of the new browsing experience, which will pile on yet another competitor against iPhone and its anti-Flash stance.

Browser aside, the BlackBerry 9800 looks like it will be the first to run OS 6.0, a significant though evolutionary upgrade, and pack Wi-Fi n alongside a 360 x 480 display. The hardware is definitely a departure from the buttoned-up QWERTY-keyboard candybar BlackBerry we’re used to, but if the Pearl Flip and Storm have shown anything, it’s that RIM’s willing to break their own mould once in awhile in order to address new markets. It doesn’t look like the 9800 will have a touchscreen, so those worried that this handset will be ruined by SurePress can rest easy.

The memory screen confirms a few new specs, like 512 MB of app memory, and what looks like 4 GB of on-board storage on top of the microSD memory card. I was wondering about the state of on-board storage with BlackBerry, since the Storm2 was the last one to have any (2 GB) and the Bold 9700 and 9650 sided instead with media cards. It’s handy to have a bit local wriggle room when swapping around memory cards, and could allow App World’s software archiving right on the device (but that’s mostly just wishful thinking).

So when can you get the Bold 9800? AT&T is supposedly picking up this bad boy in June, but we don’t have much information about other carriers.

Pixelated and Pixelated Plus Updated with Pearl 9100 and 9105 Support

You may have read my babbling about the BlackBerry game 'Pixelated' before. It's a good puzzler. The object of the...