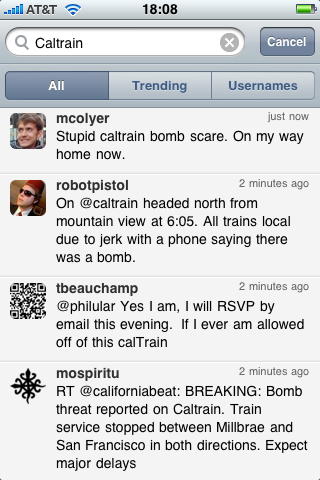 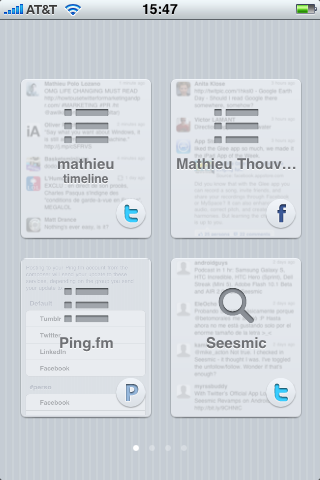 Seesmic’s mobile foray kicked off with BlackBerry and Android Twitter apps, but has since expanded to new networks (like Facebook and Ping.fm) and is now available on iPhone.  The UI is pretty flashy, allowing users to add different profiles as thumbnails much like tabs in the Safari browser, and rearrange them as you would home screen icons. As fancy as that is, you can just swipe left and right to switch between your registered accounts if you’re looking for something a little more straightforward.

Twitter is Seesmic’s biggest strength, providing support for lists, trending topics, retweets and quotes, direct messages, URL shortening, pictures, geolocation, and multiple accounts, but the Facebook support isn’t bad either – you can browse your news feed, and drop comments and Likes on items. A valuable addition to Seesmic for iPhone is Evernote, which store important items in the cloud for easy access later on. Seesmic’s acquisition, Ping.fm, is also included and lets you blast updates out to about 1.824 bazillion other networks at once, if Facebook and Twitter alone don’t do it for you.

The iPhone twitter app market is a tough place to be entering into now that there’s not only a large collection of established, recognized names, but Twitter itself has recently released an official client. Despite that, Seesmic’s entry is aggressive and promising, and I wouldn’t be surprised to see more than a few people switching to Seesmic. If any of you happen to be in that camp, download links are below.

AT&T will be raising its early-termination fees to $325 in June in what could be an effort to keep iPhone...