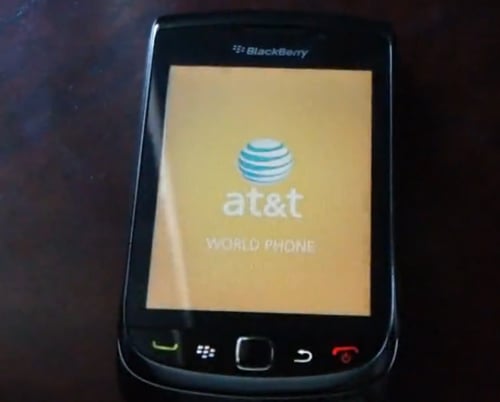 A few weeks ago, we caught a quick clip of the BlackBerry Bold 9800 slider, but, as if it was only to whet our palettes, a full three minutes of footage have bubbled up for our viewing pleasure. It runs down a lot of the features that we’ve already seen in OS 6.0, and as you can see, the launch screen confirms the 9800 will be coming to AT&T, rumoured to be sometime in June.

Before jumping into the video, here’s a quick run-through of the known specs:

So, the video. The tabs for different families of icons (like Frequent, Favorites, All, etc.) aren’t transitioning quite as well as they were in the commercial, but they are working. Luckily, the the home screen window shade seems to be snappy, responsive, and elastic. The Podcasts app we’ve already heard about seems to be loaded on the BlackBerry 9800. 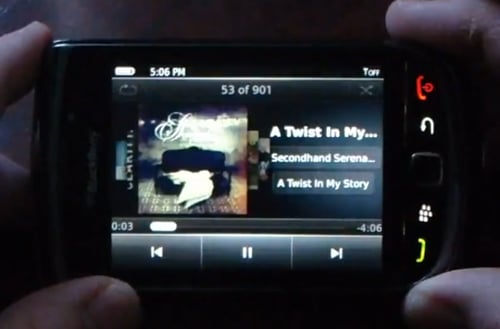 The media player is performing like a champ, including full album art, laid out in all of its mock-Cover Flow glory, and excellent kinetic scrolling. The biggest surprise of the whole video is the accelerometer, shown working for the first time at 0:53. The video demo works smoothly, but of course it always does. I’m really hoping BlackBerry can handle more outside media without the need of custom formatting – most people want to just drag-and-drop their files and be done with it. With every new device, RIM seems to get a bit better about this, but the 9800 is a big deal, and will need extra polish on the media front to really revamp its image. 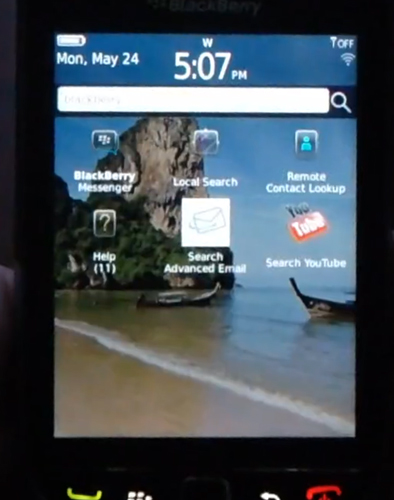 We get a live demo of the on-screen keyboard in action, both landscape and portrait, and see it disappear conveniently when you slide out the real keyboard. One nice, but subtle feature is the ability to dismiss the keyboard with a downward swipe gesture, seen at 2:49. Universal search is probably my most anticipated feature in OS 6.0. It’s a brilliant idea, and was one of my main attractions to webOS. In this video, we can see that the results include help items, local search (likely through a new and improved BlackBerry Maps), contact lookup on remote servers for those on Exchange, and YouTube searches. It’s curious that the big boys, like Google and Wikipedia aren’t included there… Maybe RIM hasn’t got the new OS out to all of their partners yet. 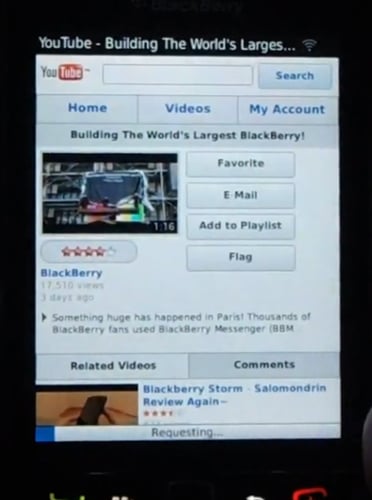 On to the browser, we get another look at what seems to be a freshly-optimized YouTube site. It’s a step up from the standard mobile version, but not exactly the full-fledged YouTube. Still, it’s good to see streaming videos actually rendering on the device – even my brand spanking new BlackBerry Pearl 9100 can rarely play anything from the mobile site.  We get a live example of tabbed browsing next, and it seems like the old Torch Mobile team has pulled it off swimmingly. Pinch-zooming is in the browser, on top of the image gallery which we saw in the big unveiling. It seems just a little chunky in the browser, but still very usable.

Finally, to allay our fears, the generous demonstrator presses hard on the screen to show that, no, it is not SurePress. Lookin’ good overall, eh? If you want to get a closer look at BlackBerry OS 6.0, be sure to take a look at our frame-by-frame breakdown of the launch video. If you’re more interested in the hardware, the same source posted some excellent pictures yesterday.

Full video and stills (in preparation for the inevitable takedown) after the jump.

[via The Berry Fix]

Just like the Nexus One, the Sprint EVO 4G has been rooted before its official release. Below we have a...