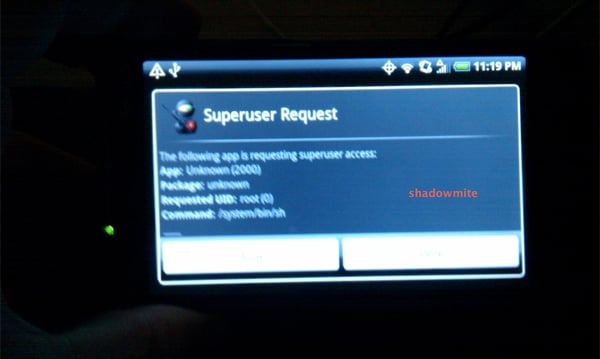 Just like the Nexus One, the Sprint EVO 4G has been rooted before its official release. Below we have a video showing the not yet released EVO giving up root access. More than likely, what’s shown is true, but the quality of the video leaves something to be desired.

If you’re hoping to root your Sprint HTC EVO 4G on launch day, we’re sorry to say that there are no instructions as of yet. But, I couldn’t imagine it will take too long to get this to the people eager to get their root on. Over at XDA, there are already some mods and themes ready to go, waiting for the EVO to get root. That means that as soon as you open up the file system to third party access, you’ll have themes and mods ready to go. Soon, you may be able to make your own version of the Sense UI, as you see fit.

What’s even better than a rooted EVO running Android 2.1 OS customized with the Sense UI? Froyo. Once the root how-to is out, developers will surely begin to port Android 2.2 to the EVO. This is certainly a great benefit of having a rooted device, as you don’t have to wait for the official update to try out Android’s latest flavor. No longer will I have to continue to carry around and EVO and Nexus One everywhere I go.

All we can do now is wait for the rooting process to be released to the public. Soon after that, we’re hoping to see Android 2.2 OS “Foryo” hitting the device.

Samsung has finally made its Wave handset available in multiple markets and it will be the world's first introduction to...