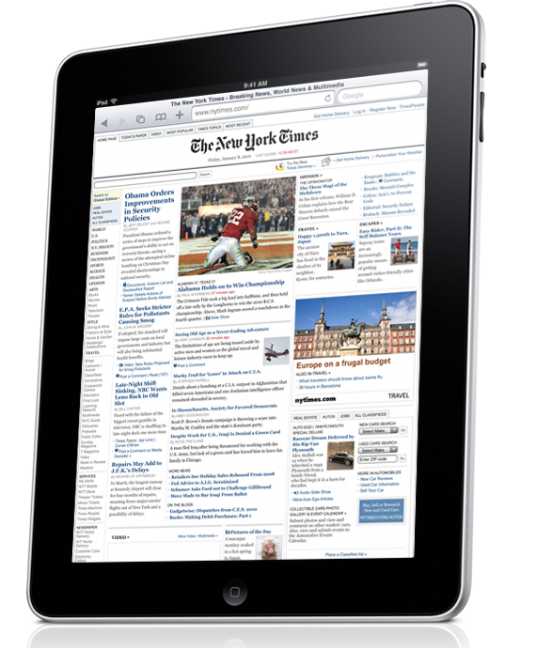 You’re going to have to add Apple’s iPad to your list of things that are banned from sports stadiums but will have you going out of your way to smuggle inside. The stadium we’re talking about here is Yankees Stadium, and they’ve formally brought the ban hammer down on the iPad. In an effort to stay consistent with policies aimed at keeping anything that “affect the safety of Yankees Stadium occupants/property,” the powers that be at the ballpark are now saying that they don’t want the tablet in-stadium during a game.

The stadium’s security policy explicitly disallows “laptop computers” from entering the facility. And, seeing as how the iPad will probably be sitting in your lap during a Yankees game, the New York Yankees are saying that the svelte “computer” is likewise prohibited.

Still, hope exists. Despite the official security policy that allows officials to pat you down and look through your belongings in search of banned items, there are anecdotal reports of iPads making it inside the stadium. If you’ve got a loose-fitting jacket or some monstrous pockets on your blue jeans, you might be able to smuggle the tablet inside.

In comparison to the Yankees, the Transportation Security Administration (TSA) previously announced that the iPad is streamlined for its journey through the airport security screening process in the US. The TSA has notified their personnel that, unlike a traditional laptop computer, all travelers are allowed to keep the tablet inside its case or bag on its way through the X-ray scanner.

So, it looks like different facilities are treating the iPad differently. We can see movie theaters following in the Yankees’ footsteps as well. But, there’s little need to worry, dear gadget lover. The iPad is still good to go most anywhere at this point. And, remember, you can always carry the Sprint HTC EVO 4G and its nearly tablet-sized 4.3-inch display in your pocket to satisfy for internet cravings wherever you are.

Just like the Nexus One, the Sprint EVO 4G has been rooted before its official release. Below we have a...