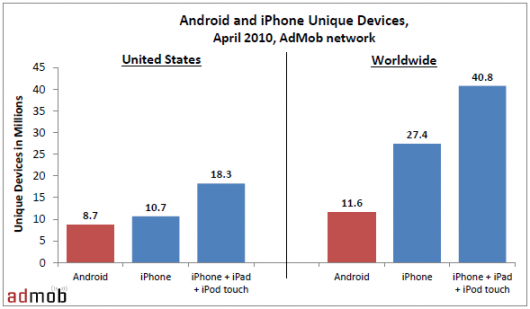 Let’s face it, with Apple’s massive installed iPhone user base and the rapidly growing Android space, we’re now living in an iPhone AND Android world now. Combined, the two platforms made up 25% of the worldwide smartphone sales in the first quarter of this year. To that end, AdMob has just released a brief metrics report for the month of April.

Over the past 3 years, Apple has been able to sell about 85 million of their iPhones and iPod Touches – both are powered by the iPhone OS. Google is now activating, (not just shipping) 100,000 Android devices a day. While the iPhone is clearly in the lead by volume, both of these numbers are staggering. The report admits it may not be completely accurate, but it’s the closest thing we have for the time being. From the looks of it, this report shows the amount of shipped devices, and not the installed user base.

For the month of April in the US, the AdMob network received 8.7 million unique ad requests from Android devices, and 10.7 million ad request from iPhones. If you were to include the iPod Touches as well, then Apple’s smartphone number jumps up to 18.3 million mobile ad requests – which is how Apple inflates its market share numbers.

Worldwide, both platforms grew, but Apple’s products surely take the cake on this one. Android ad requests worldwide rise to 11.6 million. The iPhone alone more than doubles on Android’s ad request volume, with 27.4 million ad requests. If you were to include the iPad, and iPod Touch to the iPhone ad requests, it almost doubles once again to 40.8 million requests.

Over the course of the next six months, I’d expect all of these numbers to change dramatically. The iPhone will have a new version out and about, selling like hot cakes, and boasting all kinds of cool iAds-powered mobile ads. Meanwhile Android will have a ton of newer, more powerful devices flooding the world. No matter what platform users are on, they are both used similarly, and once Android and its army of tablets come out to play, I’d expect these numbers to even out quite a bit.

Ah, Truckers Delight (NSFW!). A simple little story about a trucker who goes on an adventure to fornicate with a...