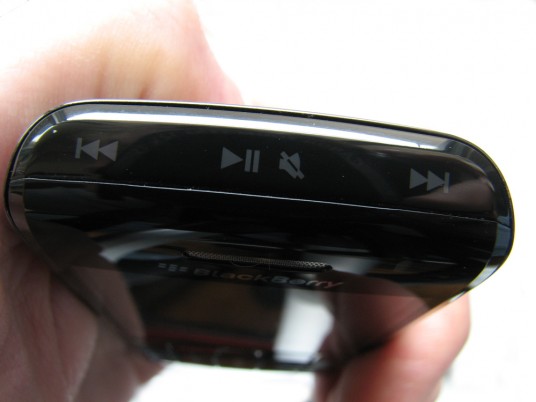 The BlackBerry 9100 comes with OS 5.0.0.629. 5.0 launched with the Storm2, incorporating a lot of visual upgrades like bubbly, finger-friendly drop-down menu items, as well as more practical stuff, like e-mail flags and remote file lookups. You can see the whole list of new features in 5.0 over here at RIM’s knowledgebase. In a broad sense, it has a lot of graphical improvements and is generally smooth and enjoyable, but of course, that largely depends on what you’re used to. BlackBerry is still a clear-cut, no-nonsense experience, geared to help you get tasks done quickly, not prettily. If you’re coming from Android, iPhone, or webOS, you’ll probably be pretty unimpressed with the the staid icon layout and seemingly-antiquated menu system, but take some time and learn its nuances and efficiencies. You get a BlackBerry to get shit done, son.

What kind of efficiencies are we talking, here? Well, let’s look at the messages app, where folks spend most of their time. Out of the box it just handles e-mail, but after fiddling with the options, you can get SMS messages in there too. Once you start downloading official RIM apps, like Google Talk, Twitter, LinkedIn, and Facebook, your messages app quickly becomes a lot more than just e-mail – it becomes a hub for your every major means of communication. Most of those apps also plug into your address book, allowing you to see information gathered from a variety of sources, like caller ID pics from Facebook, and GTalk status messages.  Even the media app lets you quickly and easily shoot pictures out to whatever social networks support it. If you don’t feel like digging through menus for what you want, you can often pull up a “short menu” by just clicking on the touchpad, and it generally offers the most common tasks, and even highlights the single most common first to allow quick double-clicks to take care of business. See, it’s the little things.

I’ve been using BlackBerry for awhile, so when someone calls the OS unintuitive, I have a really hard time agreeing. I can certainly see how a lot of options can be overwhelming, but once you find the options that you use regularly, it’s hard to imagine a faster, simpler way to get to them. Still, if you’re worried that the BlackBerry experience would be too complicated for you, I would be aghast if the new OS 6.0, and all of its streamlined UI and flashiness, wasn’t going to be available on the BlackBerry Pearl 9100. It’s also worth noting that the app selection (and prices) for BlackBerry is far from stellar. If you’re coming from the iPhone, App World will definitely leave you wondering what you signed a new two-year contract for. You likely won’t be swapping out for new apps every other week. If you’re lucky, you’ll find something worthwhile once every few months, and even then you may have to begin budgeting your app memory depending on how desperate you become for new apps.

Just remember that keyboard shortcuts make life a helluva lot easier, and there are some subtle, seamless things that RIM does to make your life easier when inputting text. For example, when typing an e-mail address, the first time you hit spacebar puts in an @ symbol and the second one is a period. Capitals and periods are generally automatically done, and there’s a whole bunch of keyboard shortcuts to make navigating apps easier – be sure to learn them early, and they’ll become second-nature in no time.