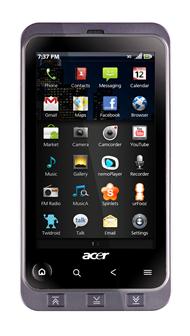 Anyone interested in an Android device from Acer are probably looking at that new 7-inch tablet due to land in Q4, but for those looking for something a little more compact, they’ve gone official with the high-end Stream. Specs seem pretty top-notch overall: 1 Ghz Snapdragon processor, 512 MB of RAM, 3.7″ WVGA AMOLED display, 5 megapixel camera with 720p video recording, HDMI out, 7.2 Mbps HSPA, Wi-Fi 802.11n, and Android 2.1.

On the software side, Acer has done a bit of work, including a custom multimedia home screen widget called Nemo, a lock screen widget not dissimilar to Flyscreen, the Spinlets streaming music app that we first saw at MWC, and a history pane on the home screen that allows you to quickly access recently-used apps. Twidroid and Facebook come preloaded, so you’ll be all social networked-up right out of the box. There’s also some “virtual look-a-like” app called UrFooz, which just sounds like something you’d see in a crappy Flash banner.

Between the Liquid E, and beTouch E110 and E400, Acer’s interest in Android has been drifting from Windows Mobile quite a bit lately, which is probably a good thing, even once Windows Phone 7 launches. Acer’s clearly taking Android’s customization by the horns and trying to offer something unique but practical with their handsets, but as great as that is, the Acer name is still not widely recognized in the smartphone circle. Hopefully the Liquid E will set the stage for other handsets, like the Stream.

No word on pricing or availability, but we’ll keep you posted.

There’s a hands-on video of the Acer Stream from Batista7OPhone, if you don’t mind listening to a bit of Italian. It’s a bit lengthy, but goes over just about everything, including hardware, software, and custom widgets. Hopefully the fact that this is coming from an Italian site doesn’t mean we won’t be seeing the Acer Stream in North America any time soon…