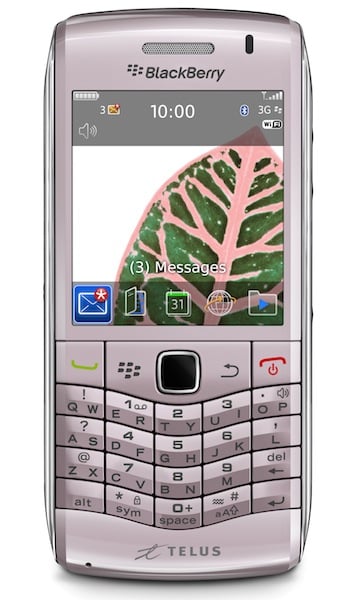 It seems like the BlackBerry Pearl 3G 9100 is on the very verge of coming to Telus and Rogers at an identical on-contract price point $29.99 on a three-year plan. Off-contract, however, we’re looking at $349.99 on Telus, and $374.99 on Rogers. Why the $25 difference? Who knows. Also, the Telus version is apparently only going to be available in this bubbly pink colour at launch, so folks looking for something in a more businessy black will have to wait a few weeks. There’s still no official presence on either online store, but I wouldn’t be surprised to see something next week, if not tomorrow. We can only presume Bell will have something similar to bring to the table, but no word yet.

If you haven’t had a chance to check out our review, the BlackBerry Pearl 3G 9100 is, at its essence, a scaled-down Bold 9700. It packs an HVGA display, 3.2 megapixel camera, trackpad, and two-letter-per-key SureType keyboard. The most definitive thing about it is Wi-Fi 802.11n, but it really wasn’t that big of a deal, in my experience.

In any case, this is a much needed refresh on a popular family of BlackBerrys. We’ll be keeping an eye out for an official Canadian and eventual U.S. launch soon.

Well, put this under another great Android phone going to a small, regional wireless carrier. We're hearing that the long...