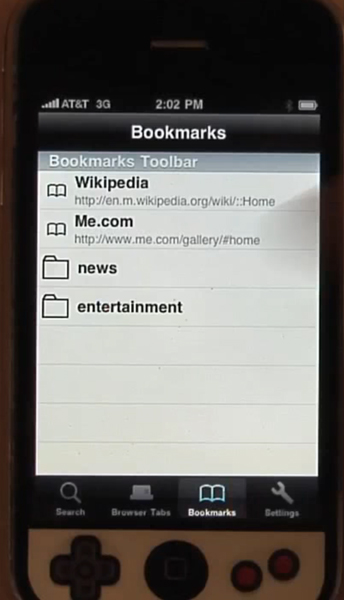 Since Apple has opened the floodgates by allowing Opera Mini into the iTunes app store, it’s natural to wonder if the other third party browsers, namely Mozilla’s Fennec currently chilling on Android, Windows Mobile, Maemo, and sometimes webOS, would find their way onto the iPhone as well. Mozilla had talked about getting Firefox on iPhone in the past, but now they actually have something to show for it, although it’s not quite what you’d expect. Firefox Home is more of a browser companion app, that syncs up with your desktop’s bookmarks, history, and and tabs for easy access on mobile. The Awesome Bar is also included, using its black voodo magic to prophesy what website you’re trying to go to when typing a few choice keywords.

Of course, all of these functions launch into Safari, not any kind of Fennec browser for iPhone. Yeah, Safari’s great, but who doesn’t want add-ons? Really? By the sounds of it ( “we’re unable to provide the “full” Firefox browser (either technically or due to policy)” ), Mozilla’s having a tough time getting the full scope of Fennec past the draconian iTunes approval gatekeepers, and might not ever get through if add-ons are the big problem. Maybe Mozilla could bend their standards a bit… After all, what would you guys rather see  – a watered down version of mobile Firefox on iPhone, or nothing at all?

Firefox Home should be making its way to iPhone shortly, so sit tight.

TCoder allows journalists to log press conferences on their iPhone

Here's one of those apps every radio and/or TV journalist could use. It's called TCoder and it allows them [journalists]...