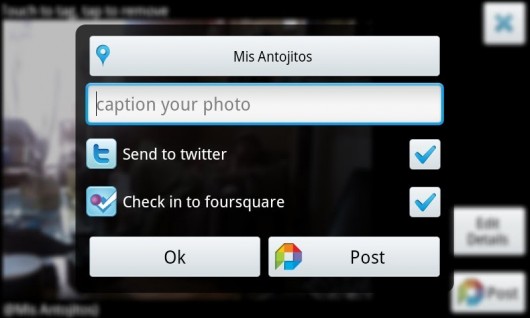 Picplz has reached the Android Market.  The new online geo-tagging picture service isn’t yet a finished product, despite its 1.0 version found on the Market, but it’s still something to keep your eye on.

I was skeptical, as I usually am, about a new location-based sharing program. With Twitter, and Foursquare running rampant, not to mention all the others floating around, what’s the need for another? Well, Picplz offers a lot with a small footprint. You can create an account right from the application, which takes less than a minute, and then you’re good to go. To make it a little more social, you can add your Twitter of Foursquare account. From there, all you do is, take a picture, add your location, and send it off. Then, you can view the pictures from the Picplz website, or from the accounts you’ve linked.

What makes Picplz so nice is that it’s so easy to use. This ease of use may be because it lacks a lot of features, but it works. You can easily tag someone with a picture you’ve taken just by tapping on them, or any other area for that matter. The application doesn’t recognize faces or anything of the kind, but it gets the job done. After you’re done tagging your photo, you can add a caption, and depending on what accounts you have linked to Picplz, send it to Twitter. Then, you can check in to the location right from there.  After that, you post your picture, and you’re good to go.

Whether this is something you’ll use everyday is up for question, but with its ease of use, it could easily get you sharing photos more frequently. I know I’ll be using it from now on, and since it’s still in its early stages, we can expect nothing but improvements from Picplz.

Scan the barcode to get Picplz now!

Over the weekend, there was some talk about a Droid 2 coming to Verizon, bearing the model number M1955. A...