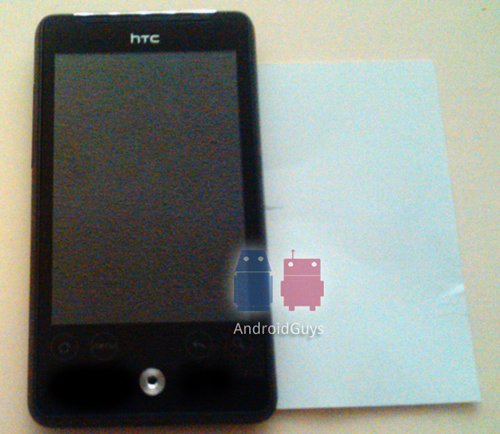 The HTC Aria, described as the “smallest Android device” to date, has been spotted on the way to AT&T from HTC. How small is it? Well, that little white paper there is a standard-size business card, meaning the display is between 2.5″ and 2.8″ like the Tattoo or Wildfire. It looks almost like Reducto took his shrink gun to the Legend. The Aria packs Android 2.1 with Sense user interface (though we don’t see the screen on), a 5 megapixel camera, microUSB slot, 3.5mm headphone jack, and optical trackpad.

Sony Ericsson and Acer have both tried their hand at super-tiny Android handsets, and there’s definitely a kind of ridiculous charm to them – in fact, the keyboard on the X10 Mini Pro was actually surprisingly usable given the size. I’m curious how Sense will look on the Aria, since the UI needs to be adequately adapted for the new size to remain finger-friendly, or you’ll be left wishing you had a stylus.

The HTC Aria may be announced as soon as June 7, so we’ll hopefully be learning about stuff like pricing in the near future.

AT&T has launched a WiFi "hotzone" in New York City's Times Square, providing coverage for many of its customers with...