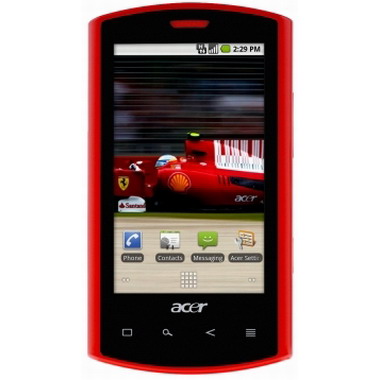 The exact release date is unknown and the same goes for pricing. We, however, know that the specs will remain identical to the original Liquid E. These include such things as a WVGA capacitive touchscreen, HSPA and WiFi connectivity, GPS, 5-megapixel camera, Bluetooth and Snapdragon processor. The difference is in the color (Ferrari Edition is red, obviously) and the presence of the Ferrari logo on the phone’s back. In addition, the Ferrari smartphone comes pre-loaded with exclusive content like wallpapers, video clips and ringtones.

Finally, there’s the ultra chic Ferrari case made out of high-quality materials to “safeguard the phone from shocks and dust” while at the same time being a “pleasure for the eye and touch.”

I played only a short time with the Acer Liquid E and I wasn’t impressed. It’s bulky and the UI kinda sucky. 🙂

I wonder why Acer hasn’t announced the Ferrari-branded Stream. That phone looks much better…

Evernote is out with an updated Android client. The main thing of the new version is that the nasty java.lang.IllegalStateException...