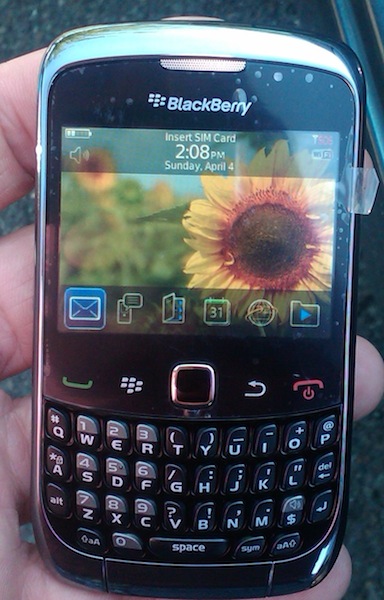 The first signs of the BlackBerry 9300 (code-named Kepler), there were indications that it would be a modest follow-up to the BlackBerry 8500 series Curves. Now that the first pictures of the device have surfaced, we can see that sums it up pretty nicely. Compared to the 8520 and 8530, the only real additions in the 9300 are Wi-Fi 802.11n (which in my experience doesn’t amount to a lot), 3G on the GSM version, OS 5.0 (although the 8520 has already been updated from 4.6 to 5.0 in some places), and an upgrade in RAM from 128 MB to 256 MB. The casing is more or less identical, minus the frets between the Menu, back, call and hang up keys, and a new chrome border. The top-mounted media keys, 320 x 240 QVGA display, battery door style, and integrated side convenience keys are all the same.

These updates are incremental and unexciting, but if RIM can keep the low cost that made the 8520 and 8530 Curve such a success, they will be setting a new baseline standard for BlackBerry devices. It’s a shame that we’re still dealing with a QVGA display and no flash on the camera, but the cost savings that are pushed to the consumer right from launch will be significant. Besides, there are plenty of high-end BlackBerrys available; by the time the 9300 comes out, the 9800 slider and 9670 clamshell will be available to handle the demands of the upper tier.

Both GSM (9300) and CDMA (9330) versions are in the works, so you can expect to see this on most, if not all of the major U.S. carriers and abroad, although there aren’t any specifics available just yet. Too bad the Kepler’s kind of boring, but good on RIM for not fixing what ain’t broke.