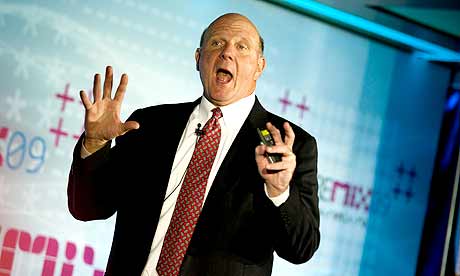 Microsoft CEO Steve Ballmer spoke at the Wall Street Journal’s All Things D conference this morning and he reiterated that the software giant is in a good position when it comes to tablets and smartphones.

The company rose to prominence on the back of its Windows and Office products for desktops but there’s an inescapable shift toward smartphones and tablets in the computing space that could leave it vulnerable to competitors like Google and Apple. The iPad has taken the early lead in the tablet space and Windows Mobile has fallen all the way to fifth place in the smartphone space. Ballmer didn’t seem too worried about these things and even threw a few verbal jabs at competitors.

He called Google’s platform strategy “incoherent” because some hardware makers may not know whether to use Android or the upcoming Chrome OS for devices. He also sees tablets as just computers with a different form factor. Ballmer acknowledged his company needs to do better with the touch interfaces for these devices but Microsoft has done quite well in the PC space so far.

“I think people are going to be using PCs in greater and greater numbers for many years to come,” said Ballmer.

As for smartphones, he said the company has been left behind and that he has learned the “value of excellent execution.” The company’s Windows Phone 7 is expected to debut by the end of the year and we’ve already seen signs that it will be powering some hot hardware. Ballmer expects that space to be dynamic with its market leaders, which presents a strong opportunity for Microsoft to regain ground.

I wouldn’t doubt Microsoft’s chances to be a major player in this mobile computing future, despite its stumbles so far. The company has the infrastructure in place to be a strong cloud-computing company and its Zune store has yet to gain major traction, but it does potentially offer a strong counterbalance to Apple iTunes store.

What do you think, readers? Is Microsoft in a good position going forward or is it an aging dinosaur that doesn’t even know how far behind it is?

The Sprint HTC EVO 4G has just gotten root! We've been waiting for this, and just one day before the...