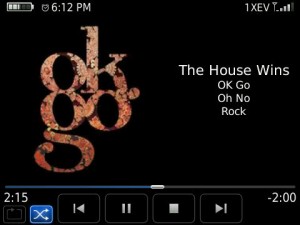 Watching videos on YouTube mobile still only works about one out of five attempts at best, which boggles the mind. I would have hoped by now RIM could have sorted this out. I thought for the longest time, maybe it was just a problem with my SIM card, but even on a brand new trial account, there’s no love. That’s not to say that the Bold 9650 is a complete media slouch. The microSD slot allows up to 16 GB to be stored, the 9650 comes with a 2 GB card included, and external controls allow you to pause, play, adjust volume, and skip tracks. As far as the media player software goes, there’s a built-in equalizer to adjust sound based on genre or preference, displays album art, and playlist support (which syncs with iTunes and Windows Media Player with the right desktop software). Although the external speaker is generally good quality and bass-heavy, it’s weird having it off to the left side, and makes listening feel really uneven. Still, it should be more than ample for speakerphone calls. 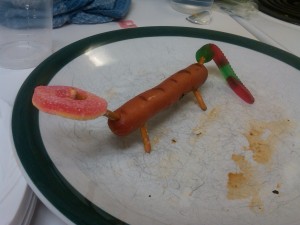 The 3.2 megapixel camera takes decent pictures, and the flash helps out in low-light conditions. It has some modest image stabilization, mock-macro “close-up” focus, geotagging, options for white balance and colour effects, and the right side convenience key can be pressed half-way to work out autofocus, which is something I think the Tour didn’t have, but plenty of other BlackBerrys, like the 9100 Pearl and the Storm2, have incorporated. Barring low-light pub conditions and fast-moving objects, pictures taken on the Bold 9650 are good enough to share on Facebook, if not print.

The Bold 9650 would almost last a whole day streaming audio over Wi-Fi, which is pretty good as far as I’m concerned. The specs list battery life as allowing 13 days of standby and 5 hours of talk, which seems about right.

I was satisfied with the call quality, and didn’t deal with any dropped calls. If you’re picking this up on Verizon, coverage shouldn’t be a problem, and if you’re going abroad, the GSM world roaming capabilities should keep you connected.

Making calls on BlackBerry is just as straightforward and intuitive as sending e-mails – any time you select a contact, be it from the address book, CC’ed in an e-mail, or even numbers in the browser, hitting the call key will get you dialling right away.

Rdio to Offer Social Music for BlackBerry, iPhone, and Android

A new mobile music app and service called Rdio was just announced today, focusing on the social aspect of listening....