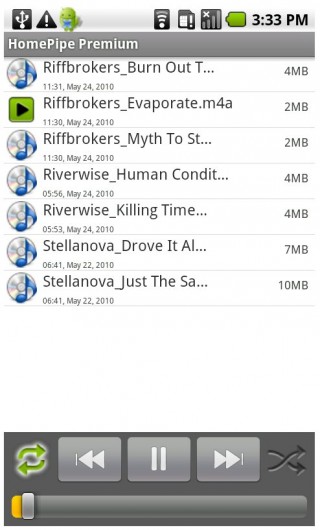 During the Google I/O 2010 Conferences last month, Google demonstrated a future Android feature that would allow Android users to stream a home PC’s music library over the air to an Android smartphone. Well, it looks like Google should have added this feature to Froyo, as HomePipe has already come out with a similar solution.

It’s not the easiest app to set up, but it’s easy enough. You’ll need to register with HomePipe, download the app for your Android phone, and install the Homepipe program on your computer before you can get things going. After everything is set up, all you need to do is give access to your iTunes library, or whatever folder you use to store all your music – that last bit is important, because Homepipe isn’t just an iTunes-only application.

After access is given to your music library, just launch the Homepipe app from your Android phone, wait for it to refresh itself, and you should be good to go. I tested this on both the Sprint HTC EVO 4G, as well as a Nexus One. With Sprint’s superior 3G coverage in my area, the EVO worked great, but T-Mobile’s 3G was abysmal, making the experience on my Nexus One less enjoyable.

You should also know that Homepipe is not just for Android devices, the application is also available for iPhone users as well.  Though it may not be needed for much longer if Apple announces an official service that allows you to stream your iTunes library to your iPhone.

There are two version of the application available in the Android Market and App Store, a free, ad-supported version, and a paid version for $2.99. While this is a great way to stream music from you computer to your smartphone, I’m sure Apple’s and Google’s official solution will provide more features. Google demonstrated that soon a user can access the online Android Market, which will at some point support music, select a song, and have it immediately sent to their device and begin downloading. Apple could have something very similar up their sleeve as well, but we’ll have to wait until next week to see what their “one more thing” is.