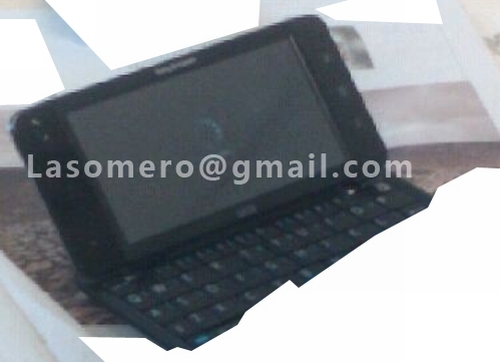 Sony Ericsson, a company that once pushed the envelope, but is now the butt of nearly every joke in the mobile industry, is trying something a bit different with the device pictured above. Supposedly coming out this fall, that beast of a electronic gear has a 5.5 inch screen, runs the stock version of Android 2.1, and … well hell, that’s all we know. It’s a prototype, and it’s difficult to tell from the image if the keyboard is one that slides from under the bottom, or if the keyboard is similar to that of a laptop, i.e. clamshell.

What’s certain is that like the soon to launch Dell Streak, what right does this type of device have to exist? It’s not going to fit in your pocket, and yes, it will fit in bag, but at that point why not get a 10 or 11 inch netbook? The “in between” device category seems to be taking off considering Apple sold 2 million iPads in less than 2 months, but I have a hunch that that type of momentum is not sustainable.

Let’s be honest, all we really want to see if Apple come out with an iPad that looks like a laptop and offers an insane amount of battery life, and the lack of complexity typically associated with regular computers. PCs and Macs included.

With all the cool devices coming out (like the iPhone HD, EVO 4G, Droid Incredible) it's easy to forget that...